Harness racing in Toronto went big-time in 1954 when the Ontario Jockey Club ran 50 twilight meets each summer at what was then called Woodbine Raceway, the east-end track later known as Greenwood until it closed in 1993. Writing in The Canadian Sportsman, Jim Proudfoot many years later wrote that some of his heroes were Keith Waples, Hugh McLean, Jimmy Holmes, Harold McKinley, Jiggs McFadden and a favorite of mine, Dunc Campbell.” Campbell, who was born July 12, 1900, and died in 1992, became the champion driver – trainer too, of course in 1958 by winning 28 races. “We hit it off. He was a Scottish farmer, as plain as a ploughed field, and there were dozens of guys just like him in my family. What’s more, he had the skills to make good stories for my newspaper, The Toronto Star.”

The Dunc Campbell racing story traces back to 1923. His involvement with horses obviously goes back a lot further as with any farm boy growing up before the age of mechanization. His first race horse was a gelding called Teddy Mac, for which he paid $55. A neighbor of the Campbell’s named Herman Sinker, who knew a little about racing, was Dunc’s first “coach.”He took Teddy Mac for Sinker’s inspection and to hitch him in racing gear as the five-year-old had shown pretty well on the pace as a road horse. Duncan could tell from the look on Sinker’s face that he was “on to something good.” That spring, at a May 24th meet at nearby Mitchell, Campbell drove his first race and won. His mentor, Sinker told him, “You’ve got the rail. Go to the front and go as far and as fast as you can.” The formula proved to be a winning one. He was still winning races well beyond his 70th birthday. He later sold Teddy Mac for $400 and bought a sister to this horse, a mare called Hazel Mac, who was retired to the broodmare ranks when she proved unsuccessful on the track. A mating with a local Grattan-strain stallion provided Campbell with two full sisters, which he showed at the local fairs. His favorite, Babe Grattan, was trained for racing and eventually became not only “an iron-tough race mare” from 1934 on, but also started Campbell in a long line of raceway performers which continued until the 1980s. Duncan told writer Robert M. Smith with great pride and a certain sense of Scottish ancestry, “I’ve never bought another horse. I always raised my own.” 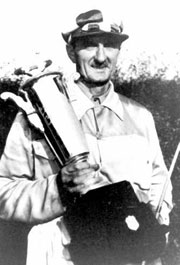 Most of Campbell’s successes came with horses he’d raised at his Ailsa Craig, Ont., farm on Argyle Road. He wanted to call them Argyle this or that, but the name was taken, as was Argyll, so he settled for Argyel. He campaigned the outstanding pacer Argyel Grattan, and some of the Woodbine standouts were Argyel Sam, Argyel Tommy, Argyel Duke, Argyel Florence, Argyel Margaret, which was named after his daughter, who at one time owned the Canadian record for lady drivers, and Argyel Chester, who beat Blaze Pick in the Windsor Raceway Invitational for Dunc, who was 70 at the time. A grandson, John Campbell, was North America’s leading driver for much of the past three decades, winning more than 40 Breeders’ Crown races and amassing career earnings of more than $250 million. He won nearly 10,000 races and is a member of the Halls of Fame in both Canada and the United States. “I’m so proud of that boy I could cry,” Campbell told Proudfoot. “He’s family, through and through. And he’ll tell you this, too. A lot of what he is he learned from me, right from the time he was three or four.”

Campbell’s offsprings and grandchildren certainly are all top-class horsemen. Writing in the The Canadian Sportsman, Robert Smith summed up Duncan Rowlatt (his mother’s maiden name) Campbell’s storied career best when he said: “In his heyday, Duncan was a pretty tough competitor. He didn’t take any guff from anybody on the track. People knew when they saw him warming up a horse that more often than not, they were in for a ‘dog fight’. Dunc would do anything he could for you before and after a race, but he was on the track for one reason and his foes were never to forget.”