If Scotty Kennedy had been thinking on the afternoon of June 10, 1958, he’d have shinnied over the fence somewhere down around the barns instead of walking through the gate like everybody else. This would have preserved his perfect record as a “scaler of racetrack fences” and would most certainly have ensured Assiniboia Downs, the West’s finest racing plant, of enduring success. It might also have brought newspaper photographers on the run, a sight that wouldn’t have dismayed a horseman always eager to gain recognition and publicity for racing.

Up to June 10, 1958, opening days had held a peculiar fascination for Alexander Gardner Kennedy. He had hopped the fence to gain entrance the day they opened the gates for the first time at Whittier Park in 1924, and when they officially opened Polo Park a year later he saw no reason to alter this habit and climbed the fence again. It’s quite possible that Scotty never did alter his habits because he has never been seen at the admissions gate at a Winnipeg track. He does insist that he puts his money on the line at, say, Woodbine or Aqueduct or Santa Anita, probably because the fences are too high and on some occasions patrolled by men of authority who have never heard of Scotty Kennedy.

A horse owner and breeder of stakes winners, Scotty is unanimously considered Mr. Horse Racing in Winnipeg and he doesn’t dispute the point. When Jack Hardy built Assiniboia Downs in 1958 the appointment of Kennedy as general manager was as automatic as the purchase of a manure truck, although there really isn’t any connection. Kennedy’s first horse was a filly, Omar’s Gift. She won the Winnipeg Futurity in 1942. The mare was later bred to Lord Fairmond. The mare’s foal was Victory Gift, who won both the Canadian and Longacres Derbies in 1942.

Kennedy played a major role in building up the Manitoba Derby and Winnipeg Futurity by encouraging horsemen from all parts of Canada to nominate their horses for the two stakes events. He was director and vice president of the Canadian Thoroughbred Horse Society and a founder of Racetracks of Canada, Inc.

Kennedy received numerous awards – Man of the Year from the Jockeys’ Benevolent Association in 1959; Good Guy Award from the Winnipeg Sportswriters and Sportscasters Association in 1970; and honored for his contribution to racing in 1981 by the Manitoba division of the Horsemen’s Benevolent and Protective Association. 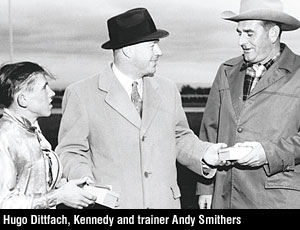