Johnny Conroy was born at Indian River, Prince Edward Island, in 1897, and was the son of Peter Conroy, himself a noted Maritime horseman and blacksmith. Johnny Conroy earned an enviable reputation throughout a lifetime of attention, care and painstaking labor devoted to the sport of harness racing.

Conroy was stabled at Truro Raceway in 1928 when his talents began to be noticed by Nova Scotia fans while racing Maritime standouts Lambert Todd, Katherine Claude, Captain Mack, Baron Aubrey, August Queen and Worthy J. In 1933 Darkey Grattan was the fastest horse in the Maritimes, helping Conroy to become the leading driver at Charlottetown’s Old Home Week, an award he first won in 1930.

Josie the Great equaled the pacing record for a Maritime mare and the Three-Year-Old Futurity for Conroy in 1937, a year that saw him win the British Consol Trophy as the leading Old Home Week driver. During his 40-year career, Conroy’s horses set numerous Maritime track records while he captured several driving championships and dash winning records. One of his memorable seasons came in 1944 when he edged the legendary Joe O’Brien for driving honors.

Conroy retired at the end of the 1962 season, winning his last race with Phillips Queen, before hanging up his familiar blue and white silks. He was inducted into the Nova Scotia Sports Hall of Fame in 1988.Truro Raceway holds an invitational pace each year in Conroy’s memory. 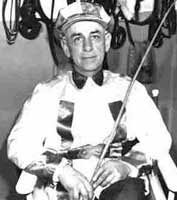