Shelly Goudreau was an honest horseman with unmistakable skill and passion for the sport of standardbred racing. His spectacular success as one of the top trainer/drivers in North America was founded in his boyhood at the side of his father, Fred Goudreau of Dresden, Ont., an experienced horseman.

Licensed as a driver at 18 years of age in 1966, he made a youthful local reputation that widened quickly when he led drivers at Windsor in successive meetings, setting a record for wins at the border track.

Moving daringly across the continent to the West Coast circuit in 1977, he was soon the darling of the California fans. In his two seasons on the Hollywood Park/Los Alamitos scene, Goudreau promptly won both the win-total and money earnings titles on the circuit. When he came back east to The Meadowlands he once again found remarkable success, attaining over $2 million in earnings. In 1981 Goudreau celebrated his best season in the bike, winning 170 races and earnings of $2.3 million.

On August 27, 1982, while driving in a race at Hollywood Park, Goudreau suffered severe injuries. Six days later, on September 2, Goudreau died. He was only 34 years old.

At the time of his death he was eighth in North American driver’s standings. Shelly Goudreau is remembered as a tremendous horseman, but more importantly, to those who had the opportunity to meet him, he is remembered as a great person. 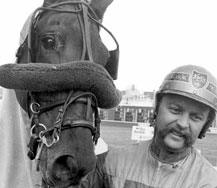