Seven years after his induction into the Hall of Fame, Jim Wright was awarded a Sovereign Award and was named “Man of the Year” by The Jockey Club of Canada. Wright, who was born in Kenora, Ont., was credited with numerous accomplishments during his lifetime. It was stated that few individuals in Canada have had such a diverse and successful career in the horse racing industry. Wright’s association with horse racing spanned five decades, beginning with his first racehorse in 1950, Paul Welsh, who campaigned at Winnipeg’s Polo Park. Since that time Wright served the industry in many capacities: Vice-Chairman of the Alberta Racing Commission; a five-year term as president of the Horsemen’s Benevolent and Protective Association, Alta., Division; president and owner of S.H.W. Totalisator Canada Limited and owner of Assiniboia Downs Racetrack. 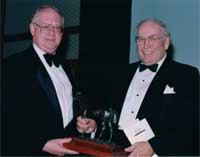 In 1991 he was proud of the fact that Assiniboia’s claim to fame was it was the last privately owned track to provide both thoroughbred and standardbred racing. Wright was instrumental in the introduction of new market incentives in Canadian racing such as the legalization of telephone and teletheatre wagering. He was active in industry representation to government regarding the implementation of the Goods and Services Tax as it applied to pari-mutuel wagering.

He and his wife Hazel operated Elmingo Farms and bred and raced numerous stakes winning horses over the past 30 years. In 1990 the Wrights campaigned Manitoba’s champion 2-year-old Picabit. Another outstanding stakes winner in their stable was Page Me Doll, winner of the Tattling and Maple Leaf Stakes against the best mares and fillies in Toronto. Other stakes winners included Wily Waltzer, Mood E. Me, Spoil Her, No More Foolin’, Sissy Ruckus and Icy Welcome. 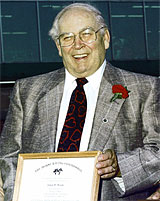