If dollar figures were important for admission into Canada’s Horse Racing Hall of Fame, Major Presto would have never made it. But in racing, as in most sports, more than mere dollars separate the great from the also-rans. Heart, charisma, versatility – all of these things stamped Major Presto as a worthy member.

This British Columbia-bred colt was foaled on April 25, 1963, and was of undistinguished ancestry. But his breeders thought he would bring more than $2,000, so they turned down that amount prior to taking him to the B.C. yearling sale. They missed by $750. The gray colt brought only $1,250 from Edmontonians Jack and Mackie MacCallum. The pair named him Major Presto, raced him for 11 years in Western Canada, and every racing fan in the west came to know and love the horse as he put in 144 hard-fought races.

He started out racing in $2,500 claiming races in Vancouver, but graduated to win 18 stakes or handicaps during his brilliant career. Major Presto was retired once, at the age of six, with a calcium deposit over the ankle that experts said would leave him a hopeless cripple. But wily trainer Jim Lengyel patched him up, and during the next six years Major Presto became the most popular horse to race in Alberta since another Hall of Famer, Joey, had dazzled western fans in the late 1930s. In those 144 career starts he garnered 24 wins, 28 second-place finishes and 27 show awards. Despite the small purses of the day he banked more than $125,000. As impressive as his race record is, it becomes more impressive when one considers his wins came at distances ranging from three-and-a-half furlongs to a mile and three-eighths.

Major Presto was retired in 1975. A special day in his honor was held at Stampede Park in Calgary. 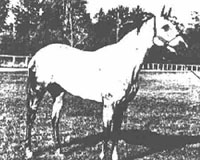