New Providence, owned and bred by E.P. Taylor’s Windfields Farm, had a spectacular 3-year-old season highlighted by his thrilling win in the 100th running of the Queen’s Plate. Under a fine ride by New York jockey Bobby Ussery, New Providence upset the heavily-favored Winning Shot and jockey Avelino Gomez, circling the other 19 starters to take the lead on the final turn and holding on for a 1 1/2 length win over Major Flight.

The traditional sovereigns were presented to Mr. and Mrs. E. P. Taylor by Her Majesty, Queen Elizabeth II, who was in attendance for the 100th running of Canada’s greatest race. It was the first time since 1939 that the ruling monarch attended the Plate. Held on a Tuesday, June 30, (instead of the traditional weekend date) because of Her Majesty’s Canadian-tour schedule, the race attracted less then 25,000 as many fans stayed home and watched the spectacle on television.

Like so many of the yearlings offered by Taylor at his annual yearling sale (Northern Dancer, Nearctic, Victoria Park to name a few) the son of Bull Page was rejected by buyers for $10,000

New Providence went on to become the first horse to win Canada’s newly-created Triple Crown trophy. He earned it by winning the other two jewels, The Prince of Wales Stakes at Fort Erie and the Breeders’ Stakes at Woodbine, and added the Seagram Cup Handicap for good measure. When New Providence retired to stud in 1963, he was a stakes winner of 10 races, including the prestigious Cup and Saucer as a two-year-old, and the Ultimus and Inferno Handicaps at five. He was second in the Plate Trial and third in the Coronation Futurity, Carleton, Marine, International Handicap, Durham Cup and Connaught Cup.

In 1982 a stakes race at Woodbine was named in his honor. 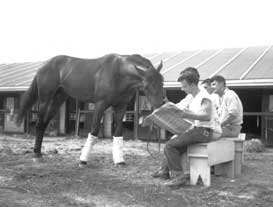