Ted Mann was a part of horse racing in Canada for more than 50 years. He had his share of successes and his share of finishing out of the money, but through both he remained gracious and warm, traits that won him countless friends. Among owners he trained for were George C. Hendrie, president of The Ontario Jockey Club, Sarto Desnoyers, the mayor of Dorval, Que., Sidney J. Langill, the driving force behind thoroughbred racing in Montreal in the 1960s and president of the Quebec Jockey Club, Dr. C.C. Hopmans, George Gardiner, Max Bell, Jack Brunton and Mel Lawson’s Jim Dandy Stable.

During the revival of racing at Blue Bonnets, horses trained by Mann won every stakes race presented. He trained Edgor’s Lane in 1961 and Fire Queen in 1962, the first two winners of the Quebec Derby. Over the years, horses trained by Ted Mann won many stakes races in Ontario. He came close twice in the Queen’s Plate. In 1964 the colt Mann trained for Langill, Langcrest, faced one of the greats and finished second to Northern Dancer. In 1974, another Mann-trained colt, Native Aid, running in the famed colors of the Hendrie Stable, finished second to Amber Herod.

Mel Lawson’s Eternal Search, a durable, versatile mare, and Langcrest, owned by Langill, were the two best horses he ever trained. A member of Canada’s Hall Of Fame, Langcrest won seven stakes races, including the Canadian Maturity and the Manitoba Derby, which he won in track record time. One of the most consistent females ever to race in Canada, Eternal Search won l5 stakes races and was a three-time Sovereign Award winner, twice earning Older Mare and Filly honors and top Sprinter in 1981. The granddaughter of Northern Dancer earned $642,177 and during here career defeated such outstanding horses as Frost King, Fiddle Dancer Boy, Rainbow Connection and Avowal. Before his death in 1983, Mann stated: “This filly is the best horse I’ve ever had. Every time she’s lost, she’s still run a good race.” No horse Mann ever trained had a bigger place in his heart. Some of Mann’s other stakes winners include Naughty Flirt, Impressive Prince, Regal Alibi, Aintee So Daintee, Step In Time, Lord Quillo, Impressive Lady, Pottahawk, Ramsay II and Ruthie’s Run. 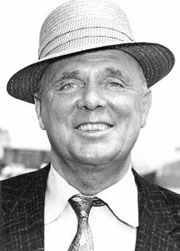