Industrialist and harness horseman Herbert E. Hatch has been described by some as a man who “has probably done more for harness racing in Ontario or for Canada than any other man.” He served the sport for many years as an owner, breeder and senior official of racetracks and Standardbred organizations. At the same time he enjoyed a highly successful business career, becoming chairman of Gooderham and Worts, a subsidiary of Hiram Walker, one of the world’s largest distilleries. His brother, Harry C. Hatch, is also a member of Canada’s Horse Racing Hall of Fame.

Herb Hatch, who was born in Mountview, Ont., was involved in harness racing for more than 40 years before his death in 1965 at the age of 83. He was owner of the Goodwill Farm Ltd., an Ontario racing and breeding establishment which raised and raced some outstanding horses, including Goodwill Bill. He was president of The Canadian Trotting Association from 1946 to 1954 and president of The Canadian Standardbred Horse Society from 1948 to 1950.

In the early 1950s he worked closely with Hall of Famer Jim Brown in an effort to secure night harness racing at Toronto’s Thorncliffe Raceway, of which he was president. Night racing was a controversial subject in those days, strongly opposed by Premier Leslie Frost and his Conservative Government, but Hatch never gave up the fight. Night racing was finally accepted and has become a way of life for thousands of Canadians. Hatch was an honorary lifetime member of The Ontario Harness Horseman’s Association, and widely acclaimed throughout his career as a man of vision who did much to move harness racing into the major leagues of sport and entertainment. 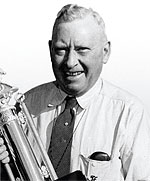