The red and white silks with red stars of Jack Stafford’s racing stable excited racing fans for more than a quarter of a century. Before Stafford’s death at age 86 in June, 1981, his horses had won 131 stakes races, ranking Stafford Farms fourth on the list of all-time leading stakes-winning owners in Canada, behind only E. P. Taylor’s Windfields Farm, Conn Smythe and the legendary Seagram Stable of another era. The first horse he ever ran was a filly he’d purchased that winter in Florida, Play Tag, at Toronto’s Dufferin racetrack in 1950. She finished second and earned $310. His horses that year earned $11,600. In 1975 he was Canada’s leading money-winning owner when his stable took home $515,599. He won this title again in 1977, 1978 and 1979.

Ironically, Stafford’s big money-winning year in 1975 came when he missed winning Canada’s major race – the Queen’s Plate, a race he won in 1973 with Royal Chocolate and again in 1974 with Amber Herod. Those two years provided Stafford with great enjoyment as he had the opportunity to meet Her Majesty, Queen Elizabeth, in 1973, and Her Royal Highness, The Queen Mother, the following year in the winner’s circle. 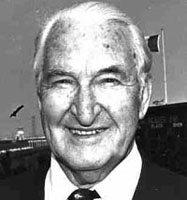 Stafford’s good colt Sound Reason won the Plate in 1977. However, the best colt Stafford ever owned, Overskate, was the favorite in 1978 but lost by a neck to Regal Embrace. Overskate, a member of the Hall of Fame, was Canada’s leading money winner when he retired in 1980 with earnings of $791,640. A champion at two, three and four and twice Canada’s Horse of the Year, Overskate won a record ten Sovereign Awards and 18 stakes races here and in the United States.

Stafford was at times a gruff, straight-forward man, but his sense of humor was keen and he knew how to lose and how to enjoy his horses, which he kept on his farms in King, where he made his home, and another at Port Elgin, Ont., an area in which he was raised. He was noted for changing trainers and had nine in his first 19 years before settling on Gil Rowntree, who held the job the longest, from 1967 until Stafford’s death.

Nicknamed the “Jam and Jelly Man”, Stafford (who owned Stafford Foods), was a traveling salesman, selling food products across Canada before tackling the sport of racing and breeding. His band of high-class broodmares at his farm in Port Elgin made him one of the leading breeders in Canada. Stafford’s many other stakes winners include Proud Tobin, Allan Blue, Tara Road, Amber Sherry, Good Port, Cesca, Ambassador B., Sharp Sherry, Royal Tara, Gurkhas Band and Tudor Queen. He was awarded a Sovereign Award in 1976 as Man of the Year for his many contributions to the sport. He also served as president of the Canadian Thoroughbred Horse Society. 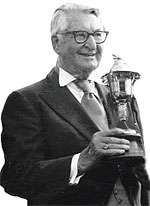