Thoroughbred racing might not have survived the lean years in Alberta if it had not been for a horse-loving livestock magnate called Lee Williams. Many were the old-time gypsy trainers (now virtually a vanished breed) who would not have had much more than empty stalls if Williams had not befriended them. “I just liked to help those old guys stay in the business, and keep the sport going,” Lee recalled. “I don’t suppose I got more than 10 percent on the dollar back, but that was fine with me.”

Though it has been the thoroughbred sport where Williams became virtually a household name, Williams ironically was first involved in harness horses with his father and grandfather. But in 1942 he became involved with running horses and during his most active years he had as many as 10 broodmares ’’sired his 1959 Canadian Derby champion Sonoma. Some of his champions included Air Cadet, a stakes winner from Edmonton to Polo Park in Winnipeg, and his 1948 Alberta Derby winner, Frank’s Mistake. Sonoma was the first filly to win the Canadian Derby after that classic was moved to Edmonton when Polo Park gave way to a shopping centre.

One of Williams’s idols was R.J. Speers, a Hall of Fame member who founded the Western Canada Racing Association in the early 1920s, embracing the three Prairie Provinces. “I learned much from Jim Speers and his protégé Lou Davies,” (also a Hall of Fame member) said Williams, “particularly in training and breeding. Jim was a great coach.”

Then in the early 1960s, Williams, who was later to become the president of the Edmonton Exhibition Association, the home of the Canadian Derby, got into the promotional business, too. With people like the then attorney general of Alberta, he helped finance the birth of thoroughbred racing in Lethbridge. At age 89, when he was inducted into the Hall of Fame, he was still attending races at Northlands and continued to buy horses, both thoroughbred and standardbreds, at sales. 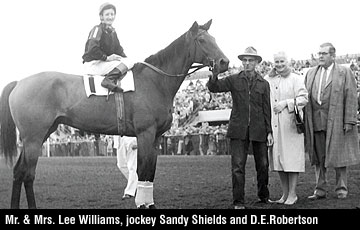