As great as she was on the racetrack, Fanfreluche gained even more prominence and fame as a broodmare, a fact underlined when she was sold for a then world-record price of $1.3 million. Bred by J. Louis Lévesque, Fanfreluche proved an outstanding race horse with 11 wins at the age two and three.

She was a consistent stakes winner, numbering among her triumphs the prized Alabama Stakes, the Manitoba Centennial Derby, Natalma, Princess Elizabeth, Bison City, Selene, Fleur de Lys, Quebec Derby and the Benson And Hedges Invitational. She placed second, by less than a length in the Queen’s Plate, and was runner-up in the Canadian Oaks. Fanfreluche, who was trained by Yonnie Starr, was a unanimous choice as Canada’s Horse of the Year in 1970 and was co-champion 3-year-old filly in North America with Office Queen, whom she defeated in the 11/4 mile Alabama Stakes.

In the historic Alabama at Saratoga, N.Y., she defeated the best 3-year-old fillies in North America. Ron Turcotte rode her that day and he along with Chris Rogers and John LeBlanc, were the only men to ride her. She later finished third at Aqueduct in the Gazelle Stakes while giving her opponents weight and was second against older foes in the Spinster Stakes at Keeneland. Invited to the prestigious Washington, D.C. International at Laurel against the world’s best turf horses, Fanfreluche pressed the pace in the mile and a half grass race, but tired and finished seventh to Fort Marcy. 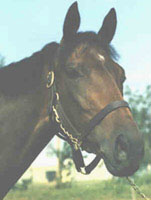 It was after her racing days were over that Fanfreluche, or “Fanny” as she was affectionately known, made her greatest contribution to racing. Her first foal, L’Enjoleur, was named Canada’s Horse of the Year. In 1978, two of Fanfreluche’s progeny were accorded divisional championships in Canada. Medaille D’or, a winner of the Coronation Futurity, was selected two-year-old filly champion while La Voyageuse, a victor in the Canadian Oaks, was named three-year-old filly champion. Fanfreluche also produced L’Extravagante, third in the Canadian Oaks, and Grand Luxe, winner of the Fury Stakes.

A daughter of Northern Dancer and Hall of Fame mare Ciboulette, Fanfreluche also made headlines away from the racing scene when she was the victim of a “horse-napping” in June of 1977 from the Claiborne Farm in Kentucky. She was subsequently recovered unharmed in early December. At the time of the incident, Fanfreluche was in foal to the 1973 Triple Crown winner Secretariat. The foal was delivered and aptly named Sain et Sauf – Safe and Sound. Fanfreluche was later sold for the aforementioned world-record sum of $1.3 million to Bertram Firestone of Waterford, Virginia. 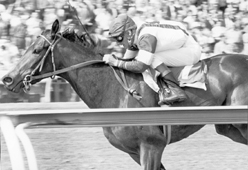