The only horse to win the Canadian Pacing Derby a record four times was one of harness racing’s most admired campaigners, The Count B. The race at New Hamburg, Ont., which is now contested at Woodbine, was the premier event in Canada for aged pacers for decades. His popularity is now commemorated with The Count B Series, which was inaugurated in 1986 at Mohawk for juveniles and in 1994 for 3-year-old colts and geldings at Woodbine.

The Count B was a roan son of Corporal Lee – Countess Jane and raced from 1942 to 1951, posting 95 wins, 32 seconds and 24 thirds in 203 starts. He was bred by J.T. Saint of Wallaceburg and sold to J.W. (Jim) Brown of New Liskeard at age three. The Count B raced in Brown’s stable during his entire career. At age eight he notched a career speed tab of 2.06.3. The Count B’s only start at two was in an exhibition mile at the Wallaceburg Exhibition Grounds. The following year at three he was undefeated in 13 starts in Canada. At five, he was also undefeated in Canada, but suffered losses racing against free-for-all competition at New York’s Batavia and Buffalo Raceways.

Cliff Chapman Sr., one of Canada’s colorful and talented reinsmen of an earlier era, developed The Count B into an outstanding performer and directed him to almost all of his greatest victories. Cliff was in the bike when he won the 1944 and ’45 renewals of the Derby, a race that began in 1936. He was second in 1946 and came back to capture the 1947 edition. Cliff’s son, John Chapman, guided The Count B down victory lane in 1948. In the Derby’s final heat the gelding broke a bone in his foot. The injury sidelined him for the entire 1949 season and most of 1950. In 1951 he toured the tracks of Northern Ontario and Quebec under the guidance of Bruce Brown, Jim’s brother, and won six of 18 starts.

His final victory was scored at Burks Falls, a long way from the major tracks he had become accustomed to. It’s doubtful there was a more celebrated harness horse in Canada during the 1940s than The Count B. He died at the age of 12 while prepping for the 1952 racing season at Lyle Jackson’s stable in Listowel. Jackson had just taken The Count B into the stable following a workout when the old fellow dropped dead. He was buried at the scene of some of his greatest triumphs – Fountain Park, first home of the Canadian Pacing Derby. A marble shaft, just inside the infield rail, marks the spot where the grand old pacer rests. 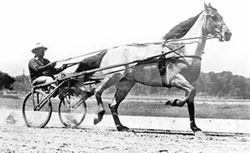