Well into the 20th century the 2:00 mile was the standard of excellence in the racing and breeding of standardbred horses. Through 1930, 26 pacers had records of 2:00 or faster and three of them were sired by a Canadian stallion, Grattan Royal. No other sire in the world had as many. Foaled in 1908 in the United States, Grattan Royal was purchased by Charles Barrett of Parkhill, Ont., at the Grattan Stock Farm dispersal sale in Chicago in 1910. Before making his racing debut in 1912, Grattan Royal was bred to 17 local mares. In 1912 he was trained a mile in 2:05 1/2 in Cleveland and attracted the attention of Nat Ray, a Canadian who was a prominent trainer-driver on the Grand Circuit. Grattan Royal was then sold to J. E. Gray of Toronto for $6,000 on Ray’s recommendation. After taking a record of 2:06 1/4 in 1913, Grattan Royal was injured and never raced again. He was then sold to Iowa interests.

When some of Grattan Royal’s early foals began to show speed and gameness, Barrett started a long search, including extensive advertising, for the stallion. Barrett eventually was contacted by the sheriff of Burlington, Iowa, who said he had a horse purported to be Grattan Royal in his charge. He had saved the horse when it was about to be destroyed because of a crippled leg. Barrett identified the horse by a peculiar lump on its tail and brought Grattan Royal back to Parkhill by train. Most of the local residents turned out to welcome home a horse that would later prompt the town of Parkhill to erect a sign that declared it “The Home of the Grattans.” After Louie Grattan won two heats in 2:00 in 1920, her sire earned his first 2:00 credit. Trained and driven by Vic Fleming, she was the fastest Canadian-bred mare at that time. The Horse Review of 1920 called Grattan Royal “King of Pacing Sires.” In an advertisement offering his services for the 1921 season, he was billed as “The World’s Greatest Living Sire of Pacing Race Horses”. His stud fee was set at $100.

Grattan Bars was the fastest and greatest of Grattan Royal’s offspring. In 1927 he won 11 consecutive races of multiple heats, setting nine track records for Fleming. In a space of 13 days in 1928 he won three $25,000 events – the New England Pacing Derby, Page Stakes and American Pacing Derby. Grattan Bars lost only one heat that season, to Widow Grattan, a daughter of Grattan Royal. He became the first horse to sire two 2:00 performers when Grattan Bars won a heat of the Page Stakes in 1:59 1/2.

In the 1920’s, the American Pacing Stakes in Michigan was a supreme prize for aged pacers and two of his sons and a daughter claimed the race – Tarzan Grattan, Prue Grattan and Grattan Bars. Another noted son, Grattan at Law, sired world champion and Fox Stakes winner Worthy Grattan. Against all the odds of a short stud career, less than average quality and quantity of mares and a location far from the vital center of breeding, Grattan Royal became the outstanding sire of his time. 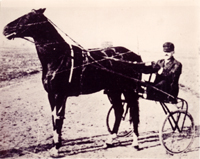