Herbert Allan Dickenson was one of Canada’s leading racing pioneers, a trait he perhaps inherited from his family. The Dickensons were committed to community service; his grandfather, John Dickenson, was a Member of Parliament, and his father was warden of the home county. Dickenson, who was born in Mount Hope, Ont., in 1905, adopted harness racing as his community, and devoted to it a lifetime of service. Farmer and stockman, he was a familiar face on the concession roads and at the county fairs as he travelled seeking cattle for his growing export business. Always familiar with horses, it seemed only natural for him to join the sport of harness racing so passionately followed by his friends. The first horse he owned was Joe Hal, while Ivan Hope with 34 wins was the best of his many top standardbreds.

Drawn into local discussions, he became a leader in striving to resolve the problems of conflicting rules, dates, and separate associations that finally resulted in the formation of the Canadian Trotting Association (CTA) in 1939. Always ready to take on any job, assume any responsibility, Dickenson believed in the value of cooperation to get the job done. He was a director of the CTA for 26 years and president for 10 years, meeting horsemen on their home grounds, from coast to coast.

He used talent for negotiation, compromise to develop, and cooperation that would aid the growth of harness racing as a burgeoning national industry.

He was elected a director of the Canadian Standardbred Horse Society in 1945, serving as vice president from 1949 to 1951, and president for the next two years, and was its first recipient of the Achievement Award for his dedication and devotion to the sport. In 1978 he was honored as the Ontario Harness Horsemen’s Association Senior Citizen of the year. A quiet, unassuming, thoughtful and friendly man, Dickenson was an international ambassador of good will for Canadian harness racing during a difficult era of expansion in the industry. He died on May 12, 1984, at his Mt. Hope home. 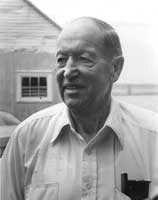