For nearly sixty years James Charles (Jim) Bentley was a delightful and colorful part of the Ontario racing scene, training Queen’s Plate winners Kennedy Road and Fiddle Dancer Boy and numerous other champions, including Canadian Oaks winner Lauries Dancer, Canada’s Horse of the Year in 1971 and a future inductee into the Hall of Fame. 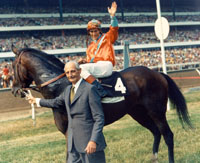 Slimmer than a leprechaun, Bentley was a tall, gaunt Irishman who was born on father’s farm in Ballyglass, County Limerick, in 1903. He had a charming, but mischievous, sense of humor. His eyes twinkled when he told a yarn, especially if the listener was gullible. “Lyin’ Jim” was his backstretch nickname. Bentley’s style of dress was unique as he supervised activities in his barn in a grey suit or sports jacket, white shirt and tie.

His first interest was his father’s cattle, but eventually he rode and exercised steeplechasers and runners for his father near Sligo. He rode the great mare Ballynode in the hunt field and in her first three races, which she won. She went on to win the Cheltenham Gold Cup in England. Bentley left Ireland in the 1920s for America after being invited to ride for Colonel E.R. Bradley’s and Idle House Farm in Kentucky. Bradley was one of the biggest men in racing in those days and won the Kentucky Derby four times. Bentley never did ride for Bradley and came to Canada in 1927 to work for trainer John Nixon and galloped King’s Plate winner Troutlet. He later trained and galloped jumpers for W. J. Northgrave of Toronto, one of the leading owners of steeplechasers.

Bentley then gained employment with Jack and Harry Addison of Toronto. They had bought six two-year-olds in 1948 and had them down in Florida. As Bentley recalls, “they asked me to train them, untried, unknown quantities, all of them, and four of them became stakes winners. One of the group, a $1,000 purchase, would put Bentley and Addison on the horse racing map in 1949 when the colt, Arise, went on to earn almost $200,000 while winning the prestigious Travers Stakes at Saratoga, N.Y., along with the Carter Stakes, Fall Highweight Stakes, Excelsior and Monmouth Park Handicaps and the Canadian International Championship at the Long Branch track in the Toronto suburbs. Arise defeated many of the leading sprinters in North America and would later be inducted into Canada’s Hall of Fame.

Bentley trained for E.P. Taylor and his son Charles, as well as Jim Corcoran, Noel Hickey, Ben Steen, Jack Carmichael and Arthur and Helen Stollery. He claimed that Stollery’s Queen’s Plate winner Kennedy Road, a champion at two and three, and also as an older horse, was “the best horse I’ve ever had.” He also conditioned the Stollery’s Lauries Dancer, who won Horse of the Year honors in Canada in 1971, dominating the opposition on both sides of the border while winning the Canadian Oaks, the famed Alabama Stakes at Saratoga and the Delaware Oaks. Bentley’s other stakes horses included Lord Durham, winner of the Coronation Cup and champion two-year-old of 1973, Jimminy Baxter, who won eight of nine stakes races in which he competed, Military Bearing, Argent, Gallant Glen, Betemight and Stone Manor, winner of the Ohio Derby and Sheridan Stakes. 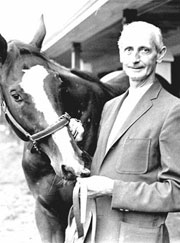