Searching for a model of the perfect Quebec horseman, one would not have to look any farther than trainer/driver Benoit Cote. A native of Quebec City from a family of 12 children, Benoit got his love of racing from his father, Alfred, a policeman who spent most of his spare time training and racing a small stable. By hard work, honesty and talent, Benoit Cote made a large contribution to promoting harness racing in the Province of Quebec. Had he imitated such Canadian-born reinsmen as Herve and Henri Filion, John Chapman, Joe O’Brien and Lucien Fontaine, who migrated to the United States with lucrative results, he too could have had a fine career on the other side of the border.

Instead he chose to stay in Montreal and not uproot his family – his wife Pierrette and their four children, Alan, a promising young driver, Marc, Lucie and Eric. By doing so Cote proved that he could enjoy a successful career by racing in his native province. During the pinnacle of Cote’s career, the best American horsemen paid tribute to his talent by using his services as a catch-driver whenever they were unable to get to Montreal for Grand Circuit Week and important stakes. In 1972 Cote set a then world record by piloting the three-year-old trotter Delmonica Hanover to a 2:00.1 win in a Grand Circuit event. Cote’s richest and most memorable victory came with the three-year-old pacing filly Semalu D’Amourin the $600,000 Mistletoe Shalee at The Meadowlands in 1985. 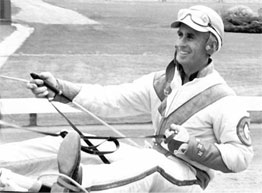 Before opening his own public stable in Montreal, Cote trained and drove for such prestigious stables as the Drummond Farms and the Richelieu Farm. Cote’s career was ended after a horrific spill at Hippodrome de Montreal in 1993. He shattered his right hand and elbow and four years later he ended his career where it began, at Hippodrome de Quebec, with 3,639 wins and over $18.6 million in earnings as a driver. His trainer stats include 664 wins and over $5.2 million. He did make a one-race comeback, however, in June, 2003, in special race at Montreal, driving Farms Pleasure. He won the event by a neck and ended his driving career on top – a place this talented horseman and gentleman certainly belongs. Cote was able to put his vast experience and passion for horses to good service as Vice President of Training and Advisor to New Owners at SONACC (Societe Nationale du cheval de course), a position he had held since 1997. 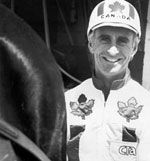