Nathaniel Daniel (Nat) Ray was a legendary horseman whose accomplishments as a jockey, steeplechase rider, harness racing driver and trainer earned him induction in the Immortals Section of the U.S. Hall of Fame for the Trotter in 1978. Ray inscribed his name into immortality in 1926 when he won the first edition of trotting’s signature race, The Hambletonian, with Guy McKinney. The horse’s owner, Henry B. Rea of Pittsburgh, Pa., wrote out a check for $4,581 for Ray as payment for his masterful drive in the $73,451 classic, the richest Hambletonian for the next four decades. Nat often said that he also won $20,000 in the auction pools betting on his horse. Thanks to a very poor showing in his 2-year-old form, Guy McKinney was 40-to-1 in the winter book.

Born in the late 1870s in the small rural centre of Whitby, he was 76 years old when he died in Orlando, Fla., in March, 1953, as the result of head injuries he suffered a year earlier in a serious spill from a sulky at Yonkers Raceway in New York. At the time he was probably the oldest driver in action. Ray’s father, Charles, was a noted harness horseman. An obviously precocious boy, Nat made his first public racing appearance at age six at the Whitby Fair astride a pony named Queen Mary. Ray’s imposing career spanned the next six decades. He managed to spread his talents across three major areas of racing -harness, thoroughbred and steeplechase – a rare blend. Racing scribes often referred to him simply as “the man with the brilliant green jacket,” a color which was predominant in his racing attire. He rode four winners of the American Grand National Steeplechase.

Ray left Canada in 1896 to begin his career as a jockey, riding his first winner at Latonia, Ky. His first winner of note (Bob Neeley) came in 1898 at Cincinnati for owner Abe Orpenof Toronto, who owned numerous racetracks in Canada. Rays witched to steeplechase riding after his weight increased. Race writers were lavish in praise of his abilities. One stated that Ray was “probably the most accomplished cross country rider that ever sat in a saddle on this continent.” They constantly advised readers to put their money on Ray, a sure bet, in the days when the track bookmakers were the rule.

Ray went to England with the prospect of riding King Edward VII’s steeplechasers and perhaps getting a mount in the Grand National. He won with his first ride. His wife, Margaret, recalled that Nat hadn’t even intended to ride on the day of his first win, but an owner persuaded him to wear his colors aboard a horse called Aero. The beast was a bad actor who had started in several races, but had never finished any. Ray not only got him to finish, but to finish first, and the horse was acting as kindly as a kitten with him. It was noted that shortly after his arrival English steeplechase riders began shortening their stirrups in imitation of his American style of riding.

During his steeplechasing career he won every major stakes race in the U.S., riding for the racing elite, including Thomas Hitchcock Jr., and James D. Widener. One of his mounts was the bay gelding Good and Plenty, considered at that time as the finest steeplechase horse that ever appeared anywhere. Acknowledged as a rough and tumble, yet highly skilled rider (his wife said he never rode rough -he was fearless), Ray rose to the pinnacle of his riding career just after the turn of the century, winning the Grand National four times in a five-year period. When racing was blacked out in New York in 1911 Ray returned home and rode at Old Woodbine with his own horses, one of which was Byzantine. He shocked everyone by deciding to give up steeplechasing altogether in favor of the harness horse.

From 1911 to 1930 he concentrated on the standardbreds. For a number of years he dabbled in both thoroughbreds and standardbreds, finally returning full-time to the trotters and pacers, where he spent his later years. For years Ray located his harness racing operation at North Randall, Ohio. Each year in the ’20s and ’30s he prepped a large stable of contenders on the Grand Circuit. Back home in Canada he was a regular for many years at Abe Orpen’s Dufferin Park, the legendary capital of winter racing. One of his great horses at Dufferin was Grattan Royal. Some of the outstanding horses trained and driven by Ray besides Guy McKinney and Grattan Royal included Peter the Brewer, Chilcoot, Jimmy McKerron, Tarzan Grattan, Knight Onwardo, Nellie Signal and the daughter of Billy Direct, Royal Blood.

In the 1950s, despite his advancing years, Ray continued to train and drive his own small stable on the New York circuit and in Florida during the winter months. By then the smiling, cigar-smoking veteran had become a legend among his peers and the subject of many interviews and stories of his lengthy career. He combined a “collage” of memories unparalleled in the history of harness racing. They called the sage “Old Nat”, and like a sage, he said of harness racing: “It was a catch-as-catch-can business then; it’s smoother now. People today are speed crazy and this has carried over into racing. In the old days we won races by maneuvering; winning the race, not breaking a time record, was the important thing. Now we don’t have time for excessive maneuvering. But it’s all for the best. Racing progresses like everything else.”

The Meadowlands, N.J., honors Ray each summer with The Nat Ray, an event for four and five-year-old trotters. The great Moni Maker won this event three times. 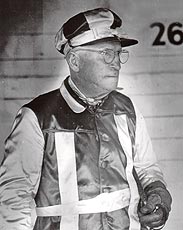