The training feats of Frank H. Merrill Jr., the man known as “The Greatest,” will likely never be equaled by any Canadian-born trainer. Dapper, colorful, often outspoken and controversial, Merrill led all North American trainers with most wins three times -1955, when he saddled 154 winners; again in 1958 with 171 and two years later with 143 wins. He also captured a record 19 Canadian training titles and in Ontario he saddled more winners than any other trainer 21 times. Four times he was the leading trainer in Florida, earning honors at Gulfstream and at Hialeah, and twice was tops at Arlington Park in Chicago. When in died in 1990 at age 71, at his winter home in Hollywood, Fla., statistics revealed that he had saddled 3,968 winners. His horses had earned more than $17 million. But Merrill’s story is far more intriguing than statistics.

From the late 1940s until the mid-1980s Merrill went head to head with the leading trainers on the continent and often with horses other trainers had discarded. His claim to fame during his illustrious career, one which earned him another nickname, “The Prince of Patch,” was transforming bad-legged claiming horses into winners. Horses with infirmities which had once been highly valued, or possessed class, received a dose of “Doc Merrill’s” care. In 1965 he authored a booklet titled “Hints for Horsemen, The Observations of a Practical, Successful Horseman.” In it he revealed many of his secret remedies and treatment for horses. These over-the-counter patented elixirs could be purchased from “Merrill’s Turf Supplies.” He was also a businessman in the truest sense.

Born in Brantford, Ont., in 1919, Frank was the son of an Italian immigrant fruit dealer, who changed his name from Marcello to Merrill. At age 14 he left school to join his uncle Fred Merrill, who was a trainer in London, Ont. He galloped and groomed horses in the 1930s and gained his “education” while working at the track withhold -time trainers and veterinarians. His first winner, which was credited to his uncle, came with Be Thankful. Later that year Merrill enlisted in the army, but was declared “unfit for military duty” and was discharged because the doctors were suspicious of his lungs. Merrill had tuberculosis and lost a lung during a two-year stay in Hamilton Sanitarium.

After World War II he bought a pair of castoffs from the Seagram Stable for $550 and obtained his trainer’s permit. By 1947 he was on his own before Dave Zakoor, a Windsor horseman, hired him to train his stable of runners at tracks in Ontario, Quebec, Michigan and Illinois. It wasn’t long before he was contending for one training title after another with his sore-legged rejects. Of the several thousand horses he trained, Merrill said that his favorite was Alstimu. “We used to call him Ali Baba, after the 40 thieves. When he ran it was like stealing money. He won six races in 1949 and five out of seven the next year. What a horse! He was bowed in both legs and had two popped knees. But he had a heart as large as a watermelon. What a competitor -a quiet horse with character. He was a money machine.” 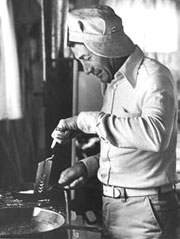 Puss n Boots, however, was the horse that gained Merrill more notoriety than any other. Cruising to victory at Fort Erie the colt jumped the hedge and skidded into an infield lake. The horse was written up in Ripley’s Believe It or Not, Esquire Magazine and almost every newspaper and horse racing magazine in North America. “He was a publicity hound, always getting into trouble, in New York, Florida. Trainers didn’t want to run against him. But he was a good horse, won two or three stakes races, including the Niagara. He was my “Wonder Horse” because for a while there I wondered what he was going to do next,” said Merrill.