Horse of the Year was a title Flaming Page richly deserved, yet didn’t win in 1962.

There’s no denying, however, that the rangy daughter of Bull Page and Flaring Top was broodmare of the half-century. After retiring due to injury, Flaming Page produced just three foals; Fleur, the dam of The Minstrel; Nijinsky II, England’s Horse Of The Century, and Minsky, a champion at two in Ireland.

Flaming Page, bred by E.P. Taylor, had a brief but spectacular racing career. At two she broke her maiden in the Shady Well Stakes at Woodbine, then journeyed to Aqueduct, where she won an allowance race for trainer Horatio Luro. In 1962, in the full bloom of her 3-year-old season, Flaming Page won the Canadian Oaks with relative ease. A week later Flaming Page captured the Queen’s Plate. In attendance that day was Queen Elizabeth, The Queen Mother. The filly’s Plate performance was fit for a Queen, too.

Flaming Page was the first filly to win both the Canadian Oaks and the Queen’s Plate, Canada’s two leading 3-year-old events. Her racing career came to an end in the Coaching Club of America Oaks at Belmont, when she suffered an injury. The filly had proven earlier in the year that she belonged with that company, though, by finishing second in the Kentucky Oaks at Churchill Downs to the brilliant champion Cicada.

Flaming Page was retired after 16 starts. She was Canada’s leading money-earner in 1962 with $88,075, yet she did not win the Horse of the Year title, which went to Crafty Lace.

Flaming Page’s first foal, Fleur, was the product of a mating with Victoria Park. Fleur was a sensational mare, numbering among her progeny The Minstrel, Horse of the Year in England in 1977. In 1967 Flaming Page was bred to Northern Dancer, a mating that produced Nijinsky II, a champion at age two and England’s first undefeated Triple Crown winner in 35 years. Her 1968 foal was Minsky, who was Ireland’s champion 2-year-old colt in 1970. In 1969 Flaming Page had a particularly difficult time foaling another Northern Dancer colt. The colt died and Flaming Page was unable to conceive in later years. She was retired in 1975. 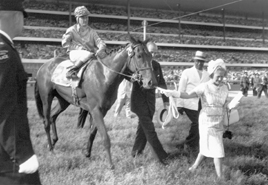