When Ronald Joseph Turcotte was awarded a Sovereign Award as horseracing’s Man of the Year in 1978, George Frostad, Chairman of The Jockey Club of Canada, eulogized one of the world’s eminent jockeys. “From the time he first started riding in Ontario as an apprentice, Ron has exemplified the will to win of a true Thoroughbred. He has done his job with class, and has accepted his victories and defeats with grace,” said Frostad. “He was consistently among the top money-winning jockeys in the world during his riding career, and his stirring rides on Big Red, Secretariat, captured the imagination of racing fans and non-fans in 1973.” At the time the only other men to receive Man of the Year honors were E.P. Taylor and Jack Diamond. 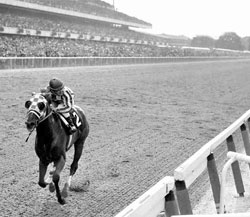 Turcotte peaks over his shoulder. Secretariat – 31 lengths the best- in the Belmont Stakes

Tragically, Turcotte’s riding career came to an abrupt end on July 13, 1978, when he was injured in a spill at Belmont Park. Ron was paralyzed from the waist down. The spirit and drive of Turcotte has served as a model for future riders. Following the accident, which confined him to a wheelchair, he eagerly served as Chairman of the March of Dimes campaign on Long Island, N.Y., and was involved with the Toronto March of Dimes. The jockey who guided many of the world’s greatest thoroughbreds, including Triple Crown winner Secretariat, gained a rapport with horses in logging camps in the 1950s near his home in Drummond, New Brunswick. He was born in Grand Falls, N.B., on July 22,1941, and at age 14 left school to help his father cut lumber. He was the second oldest of 12 children. Ron’s responsibility was the family mare, Bess, who would drag logs through the bush. At 18 he headed to Toronto to work as a roofer. Construction at that time, though, was halted because of a strike. While whiling away time watching TV in a rooming house, Ron viewed with interest the running of the Kentucky Derby. It sparked an idea. The following day Turcotte knocked at the security house door at Woodbine racetrack, looking for a job, and eventually was allowed into the backstretch, where he met Joe Thomas, vice-president of Windfields Farm. His career began, mucking stalls, walking and rubbing horses, and finally galloping them for trainer Pete McCann in 1960.

George Thompson, a former rider, took Turcotte under his wing at Windfields and it was not long before the youngster from New Brunswick was handling the most fractious young horses. He broke yearlings that winter at Windfields and then galloped and worked horses for trainer Gordon Huntley in the spring of 1961. In1962 at Fort Erie Turcotte won his first race on a tempera-mental gelding named Pheasant Lane. By season’s end he was the leading rider in Canada with 180 wins. In 1963 he again earned riding honors in Canada with 216 wins before leaving in September to ride in Maryland and later New York and Delaware to ride against the leading jockeys in the United States. He was the leading rider at virtually every track he competed at and was riding some of the most famous thoroughbreds of that era.

During an 18-year career Turcotte rode 3,032 winners. His mounts earned more than $28 million. In 1972 he won the Kentucky Derby and Belmont Stakes for trainer Lucien Laurin on Riva Ridge. Besides his Triple Crown triumph on Secretariat, Turcotte also won the Preakness Stakes on Tom Rolfe. Turcotte also rode Northern Dancer as a two-year-old along with such other champions Shuvee, Damascus, Fort Marcy and Vent du Nord. The years 1972 and 1973 were financially Turcotte’s best as he was the leading stakes-winning jockey on the continent both years. Only Laffit Pincay earned more money that Turcotte in 1973. The following year the Hon. Jules Leger, Governor-General of Canada, invested jockey Turcotte as a Member of the Order of Canada. He was the first person associated with thoroughbred racing in Canada so honored. He was also named French-Canadian athlete of the year and was the first winner of the Avelino Gomez Memorial Award in 1984.

One of Turcotte’s lowest moments came in October, 1973, when he was suspended by the stewards at Aqueduct, N.Y., for five days for “careless riding.” The suspension began the day before the Canadian International Championship at Woodbine, and prevented him from riding Secretariat in the horse’s finale. Earlier in his career Turcotte had twice won this race, with Will I Rule and with One for All. “It was the most disappointing thing to ever happen to me,” said Turcotte from his Long Island, N.Y., home. He was close to tears. “Last race and all. Riding in my country on a Triple Crown winner, winner of the Marlboro Cup, and in his race finale. Terribly disappointing. You have to know I feel badly. What can I say?” Turcotte credited much of his career success to his outstanding mounts, especially one: “I’ve ridden many good horses, but Secretariat was the best by far. He did the same thing that any horse does, but did it better and faster.” 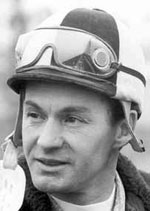