For more than a quarter of a century Hedley J. Woodhouse rode the finest horses for the biggest purses offered in North America. Born in Vancouver on January 23,1920, Woodhouse scored the first win of his brilliant career at the now defunct Lansdowne race track in that city. The win came on July 21,940; by the time Woodhouse hung up his tack in 1971 he had piloted more than 2,600 winners. 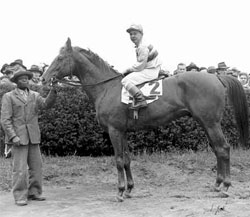 Stymie, winner of Grey Lag Stakes, was one of Woodhouse’s many stakes winners

Woodhouse rode for more than 30 years – a considerable length of time for any athlete to remain physically and mentally sharp, and especially so in the dangerous profession of race riding. His most lucrative years were in New York, where he rode the winners of virtually every major stakes race on the rich New York circuit. The Withers, Gotham, Dwyer, the Coaching Club Oaks, Firenze, Comely, Champagne, Laurel Futurity and the Acorn and many others were won by the light-weight rider from Canada’s West Coast. He rode some of the top horses of the day too, including Stymie, Fisherman, Levee, Hitting Away, Bewitch and Mister Jive. He also rode for some of the most discriminating owners, among them King Ranch, Wheatley and Widener, and the truly honored trainers in the game – Hirsch Jacobs, Sunny Jim Fitzsimmons, Preston Burch and Syl Veitch. His single biggest year came in 1955 when he rode 148 winners. Through that era he battled year in and year out with another Canadian-born jockey, Ted Atkinson, for New York riding honors. Four times he had a mount in the Kentucky Derby. His best finish was on Palestinian in 1949.

Some observers credit his talent with fillies and mares as the big reason for his success. “Fillies and mares are generally more temperamental than colts and geldings, so they need more careful handling,” said Woodhouse. “You’ve got to let them have their own way as much as possible.” The figures indicate Woodhouse knew how to handle the ladies. Towards the end of his career he had won 67 stakes races in New York, and 40 percent of those were aboard fillies or mares despite the fact stakes for the gals made up only 30 per cent of the program.

Many, however, said that Woody was a great rider on any kind of horse. Howard A. Rowe, writing in the American Turf Monthly, agreed, saying, “.but it overlooks the fact that Woodhouse handled some of the outstanding male performers of his day with that uncanny judgment of pace which ranked him among the best in his profession. Look at the roster of superior animals that he guided to victory: Stymie, Sailor, Levee, Nail, the indomitable Three Rings, Fisherman and Chicle II.”

As late as 1970, 30 years after he started riding, Woodhouse was still winning. That year he won the jockey’s title at Florida’s Tropical Park. He earned a reputation as a rider who could do anything with a horse, and do it well. He didn’t specialize in fast starts or blazing come-from-behind finishes. If anything stood out, it was his ability to hold a horse together for the finish of a race. Many a horseman remarked that Woody was better than any other rider at getting the most out of his horse in the last few jumps to the wire. 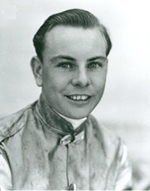