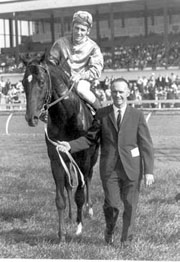 McCann, who was a top jockey, saddled six winners of the King’s and Queen’s Plates. He was also the trainer of six that were named Canada’s Horse of the Year – Bull Page, Canadiana, Queen’s Own, Nearctic, Canebora and Viceregal, who was one of McCann’s favorites. As a juvenile he was plagued with soundness problems but was unbeaten in eight starts, seven of them in stakes races. The first horse he ever saddled for Taylor, Major Factor in 1951, won the Plate. Two years later McCann was back in the Queen’s Plate winner’s circle with Canadiana, the first Canadian-bred to earn more than $100,000. Lyford Cay followed in 1957 and two Triple Crown champions, New Providence in 1959 and Canebora in 1963.

McCann was retired as Windfields’ trainer in 1971. But in semi-retirement and in his early eighties, he amazed race trackers each morning when he would climb into the saddle to gallop his own string of horses. Jim Coleman wrote: “For Pete McCann this is simply an ongoing way of life. He’s a horseman and he has no intention of hanging up his tack. Although he spent 21 years as head trainer for Canada’s mightiest thoroughbred racing establishment, the E.P. Taylor stable, he did not think it was the slightest bit demeaning to be galloping three or four claimers every morning just after the dawn breaks over the shedrows. This is the type of life which Pete loved. And, he reasoned, why break the habits of a lifetime when you are still nimble and enjoying 100 per cent good health?’

He took out his trainer’s license in 1940 and won the Plate that year with a first-time starter, Willie the Kid. When McCann was 18 he was the champion jockey at the 1926 winter meeting in Havana with 55 winners. Cuban horse racing was important in those days and the daily results and stories about the Havana races were carried in newspapers in Toronto.

So, when McCann, who was an outstanding amateur flyweight boxer in Canada, returned to East York he expected a hero’s welcome from his father, Tom McCann, chief constable of the borough and a former heavyweight amateur boxing champion of Canada. Regrettably, the elder McCann had also read that Pete had been suspended for rough riding in the last race on the final day of the meeting. Chief McCann tossed the prodigal son from the house for allegedly besmirching the family name.

McCann turned to training horses in the 1940s at the conclusion of his race-riding career. Willie Morrissey gave him a couple of horses, including a colt named Willie the Kid, which hadn’t started as a two-year-old. Every morning during the winter of 1940 McCann galloped Willie the Kid over the Dufferin Park surface five or six miles. The colt ran under the ownership of Mildred Kane and had never started in a race before he went to the gate for his upset victory in the Plate.

McCann, who was president of a prize rabbits club, was referred to as Gordon to his family, and as Pete to horsemen. He was reserved to the point of being monosyllabic and rarely used two sentences when one would do. In 1971 Mr. Taylor split his stable into several divisions to race in Canada and the United States, each with a different trainer. McCann was given a well-deserved retirement. He could not enjoy his rocking chair and the good life on his little farm in Locust Hill, Ont., though. He longed to be riding a horse and not the pine and it was not long before Pete was back at Woodbine with a small string of claimers. McCann died January 18, 2000, of pneumonia at Markham-Stouffville Hospital.