When he saluted the stewards in 1966 before dismounting for the final time in his exceptional career, Pat Remillard was at age 60 the oldest active jockey in North America. Horsemen, acknowledging that “old Pat” looked like he could have ridden forever, said that Remillard in his prime must have been one hell of a horse backer because the cagey veteran was still something to marvel at when out- riding his younger opponents at Woodbine. Born in 1906 in Beresford, South Dakota, Remillard compiled 1,922 victories during a 38-year career. One of his cherished records of riding in twenty-five King’s or Queen’s Plate races stood until 1997 when Robin Platts broke the mark.

As a teenager Remillard rode without much success at country fairs in Illinois before heading to Chicago to try his luck. He almost starved at the Chicago tracks before heading to Ohio, where he rode his first winner, French Brigade at Bainbridge Park. The next three years he was one of the minor sensations of U.S. racing, leading the jockeys’ standings at New Orleans, Maryland and Florida and even competing on New York tracks. In 1933 Dr. W.P. St. Charles and William H. Wright convinced him to come to Canada and handle their horses. “It was the last place I wanted to go. All I knew about Canada was snow and Eskimos. But this man kept on insisting, so to get rid of him I named a figure so high he would never accept. I liked to fall over dead when I named my price and he said ‘when can you report’. Well, I was stuck then. I had to come. And I never went back. Believe me, that was the best thing that ever happened to me.” 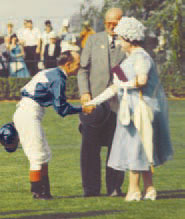 Greetings from The Queen Mother

Remillard’s first Plate mount came in 1933; his last in 1965. He won the King’s Plate in 1943 on Charles Hemstead’s filly Paolita, a 37-to-1 long shot. He won the Breeders’ Stakes three times, Prince of Wales and Canadian International and King Edward Gold Cup twice and the Grey Stakes five times. He earned the reputation of being a master on two-year olds. In 1965, at age 59, he was still winning stakes races and was the jockey of E. Day, a future Hall of Famer. There was hardly a stakes race on the OJC circuit that Remillard did not win. Among the outstanding horses he rode were Horse of the Year Hidden Treasure, Silver Ship, Ramblin Road, Vase, Anita’s Son, Pink Velvet, Moony and Shady Well. But his favorite was Ben Steen’s magnificent “cripple” Jimminy Baxter.

The late Avelino Gomez paid attribute to his long-time adversary, saying “He was in his 50s when I first started to ride against him. I soon found out that he was one tough cookie. He was a master on the lead, and very tricky. He was full of tricks and tough to go by. You had to time your move just right and had to do it with room to spare. If you moved too soon you found Remillard was still sitting with lots of horse under him.” Gomez added with a laugh, “Pat rode long and one of his best tricks was to boot your horse in the chest when you tried to edge by. The trick wasn’t illegal, it was just his way of riding.” Following his illustrious riding career Remillard took out his trainer’s licence in 1966. His clients included Mrs. M. Guthrie’s Gold crest Stable and Mrs. J.A. (Bud) McDougald. Pat also served as president of the Jockey’s Guild for several years. 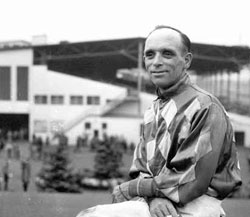