The Minstrel was Europe’s Horse of the Year in 1977. He was a dazzling chestnut with a large blaze and four white stockings, a chunky, muscular colt who became a blur when he launched his hell-bent-for-victory finishes.

Because racing and breeding are essentially built on expectations, The Minstrel had much to overcome from the moment he was conceived. His dam Fleur was a half- sister to world champion Nijinsky II, quite enough to singlehandedly effect a universal whetting of appetites. But, for The Minstrel, there was more. He, too, was by the incomparable Northern Dancer. He too was a Canadian-bred, an E.P. Taylor-bred. Physically, however, he was not at all like Nijinsky II.

The Minstrel played all of his great performances before racing fans in Ireland and England. A $200,000 yearling purchase by Robert Sangster at the Keeneland Yearling Sales in 1975, The Minstrel was dispatched to the yard of the world’s renowned trainer Vincent O’Brien. At two, The Minstrel ran three times, twice in Ireland, including the Larkspur Stakes, and finally at Newmarket, where he won the Dewhurst Stakes. Those three outings convinced experts that The Minstrel was a colt for the future. His 3-year-old campaign began with a victory in the Ascot Two Thousand Guineas Trial Stakes, but then he sustained two consecutive losses in the Two Thousand Guineas at Newmarket and in the Irish Two Thousand Guineas at The Curragh.

As the Epsom Derby approached, doubts had been raised about his character and ability. Champion jockey Lester Piggott chose him over the heralded Blushing Groom and triumphed, winning by a neck in a monumental stretch duel. Shortly afterwards The Minstrel won the Irish Sweeps Derby and concluded his season in Britain’s richest weight-for-age event, The King George VI and Queen Elizabeth Diamond Stakes at Ascot. Racing against classic winners, it took another ferocious display of tenacity by The Minstrel to win by a short head. He was voted England’s Horse-of-the Year. His breeder, E.P. Taylor, acquired a half-interest in him and syndicated him for $9 million, sending the brawny Canadian to stud at his Windfields division in Maryland. 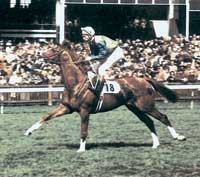