It was obvious that Montreal’s Irving Liverman had purchased himself a pacing mare that would be considered one of the greats when Handle With Care won her first 24 races. Acquired for $12,000 at the Tattersalls sales, the daughter of Meadow Skipper won 53 of 99 starts from 1973 to 1976; set numerous world records and retired as the richest and fastest pacing mare in history. Each season was filled with awards. She was Canada’s Horse of the Year at two and three; the Canadian Trotting Association and USTA’s champion juvenile pacer of 1973; 3-year-old pacing filly for both countries in 1974; the USTA’s 4-year-old pacing mare of 1975 and CTA aged pacing mare of 1975 and 1976.

Driven in most of her starts by Billy Haughton or his son Peter, Handle With Care breezed through her first 17 starts at two, winning the Matron, Miss Vera Bars, Blue Bonnets Grand Circuit, Belle Acton, Hanover Filly, La Paloma, Canadian Series and Quebec’s Loto Perfecta Series. Her fastest mile was 2:00.2f at Liberty Bell. Handle With Care extended her unbeaten skein to 24 races in 1974 before Joannas Time nosed her out in the Bronx Filly Pace at Yonkers. Later that season she put together an eight-race winning streak and five world record performances on the way to 19 victories in 24 starts.

Her assault on the world record tables started in September at the half-mile Delaware, Ohio, oval where she won the Jugette in heats of 1:57.4 and 1:59. The 1:57.4 clocking equaled the world record for the fastest mile by a sophomore filly on a half-mile track. The combined time of 3:56.4 was both a record for 3-year-old fillies and all-age mares. She was timed in 1:54.2 in a time trial at Lexington to become the fastest filly or mare. The time for the mile was two seconds faster than any filly or mare had ever gone and the fastest mile by any horse in 1974. Handle With Care climaxed the season by beating a male dominated field including Armbro Omaha, Armbro Nesbit and Sir Dalrae in the Western Pace at Hollywood Park in 1:54.4. It was the fastest race time in history by a filly or mare and marked only the second time a Standardbred had gone faster than 1:55 in a mile race – Albatross being the first.

In addition to the Jugette and the Western Pace, Handle With Care’s 3-year-old stakes credits included wins in the Niagara, Constance Scott, Flora Temple, Adios Volo, Lady Maud, Tennessee Pace, Batavia Downs Filly, Hanover-Hempt Farms, and a heat of the Prix d’Été. Her performances in the Prix d’Été, American Pacing Classic and Western Pace proved she could hold her own against the best male pacers of her era. Starting with her 4-year-old season, she was forced into open competition and responded with 11 wins in 27 starts.

Her most impressive win of the year came in the mile and one quarter Yonkers International in which she beat the boys by two lengths in world record time of 2:30.1. She was also victorious in the Washington Park Pacing Derby, Miss Single Star Pace, the U.S. Pacing Championship, American-National Maturity, Beaches and Tal Woolley Memorial. She added six wins in her final year, including one against the legendary Rambling Willie at Yonkers. Her final race was a winning effort in an open handicap at Roosevelt. Handle With Care’s broodmare career was not as successful. She produced nine winners, eight of which took 2:00 records and included Sizzling Notacare (1:56.3f) and Careful Driver (1:57f). 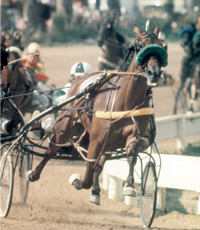