John Chapman, who became one of harness racing’s first catch-drivers, was gifted with a light touch and an iron will as he proved by battling back from major adversity at the height of his career – a barn fire which wiped out his entire stable and a debilitating and mysterious illness. After each setback Chapman returned to the racetrack more determined than ever and that strength of character and talent became his trademark. Known as “The Man with the Golden Hands,” Chapman was an extremely gifted driver and trainer. The year 1947 was a pivot alone for the Toronto-born Chapman. It was the year the 18-year-old hockey player decided to hang up the skates and follow the family tradition of racing horses for a living. However, as captain of the Toronto St. Michael’s Junior “A” team, the thoughts of a professional hockey career must have been enticing. But Chapman had no regrets, for he had one of the great careers in harness racing, winning almost 4,000 races and more than $21 million in purses.

His father, Cliff Chapman Sr., himself a member of the Hall of Fame and known as “The Little Giant of the Sulky” campaigned the legendary The Count B during the 1940s. The pacer won the Canadian Pacing Derby four times, including his fastest effort in 1948 when Cliff’s son John was in the sulky. It was his first major triumph. Chapman’s first start and first win came at the old Toronto racing facility, Dufferin Park. His two finest years came in 1976 and 1977 when he won 218 races in each of those years, and collected almost $2.5 million in purses in 1977. Chapman was the man who drove the sensational Governor Skipper in 1977, urging the pacer to speed records and money-earned records throughout the year. He has driven other stars of the harness wars, including Rum Customer, Skipper’s Dream, Diller Hanover, Savoir and Delmonica Hanover. In fact, Chapman drove Delmonica Hanover to a pair of wins in the Roosevelt International, in 1973 and 1974 and again with Savoir as a trainer. Chapman set numerous world records and won the majority of the sport’s most prestigious stakes events.

Chapman knew the bad times too. His entire stable was wiped out in a New Year’s Eve fire in 1961, but he rebounded in 1962 to have his finest year to that point. He’s had his share of serious racing accidents, and spent much of the 1975 season fighting off illness. It is a measure of the man that he came back in 1976 to record his finest year. His name was perennially at or near the top of the driver rankings in North America during his stellar career, which was abbreviated in 1980 when he died suddenly at age 51 while preparing to go to the races at Roosevelt Raceway, N.Y. 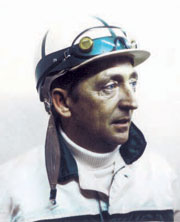