Joseph (Yonnie) Starr was often described as “the trainer of champions.” There is absolutely no argument on this statement. Examine his training credentials.

Seven of the horses he conditioned are in Canada’s Hall of Fame and another is enshrined in the U.S. National Museum of Racing Hall of Fame in Saratoga, N.Y. Six of his horses earned Horse of the Year honors in Canada. One did it twice. Four of his animals won the Queen’s Plate. Ten Sovereign Awards decorated Starr’s trophy case as well. 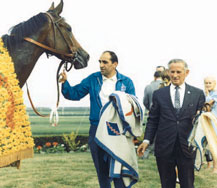 Unquestionably the best horse he ever trained was La Prevoyante, who won all 12 of her starts as a two-year-old, many in graded stakes on American tracks, and was edged out for Horse of the Year honors in the United States by Big Red –Secretariat. She won an Eclipse as juvenile filly champion and in 1995 joined the greats of horse racing in Saratoga’s Hall of Fame.

Starr’s accomplishments, while glorified over La Prevoyante’s greatness, included Plate winners Ace Marine, Caledon Beau, Jammed Lovely and L’Enjoleur. Ace Marine was Horse of the Year in 1955; Jammed Lovely, a Hall of Fame inductee, beat the boys in the 1967 Plate; Caledon Beau ran in two stakes races and worked two miles during a seven-day span before winning the Plate in 1958 and L’Enjoleur became the first horse to ever win back-to-back Horse of the Year honors. Starr’s other Horses of the Year include Northern Dancer’s marvelous daughter, Fanfreluche, who became an outstanding broodmare before being sold for a world-record $1.6 million; the incredible Wonder Where, who continually defeated males during her prolific career, and L’Alezane. Some of his other Sovereign Award winners include three-time award winner La Voyageuse, Medaille d’Or and Seraphic.

Starr’s ability with fillies was recognized by Conn Smythe, who gave him a horse “on the cuff” in 1936 and later employed him during the years he dominated racing in Ontario. The owner of hockey’s Toronto Maple Leafs dubbed Starr, “The greatest trainer of fillies ever. Yonnie trains fillies by instinct. He has a feeling for them like no other trainer. Other trainers go by the book with fillies. Not Yonnie. He throws the book away and does it his way. He’s a master and a great little asset to the business. His hat size hasn’t changed one bit since the day he and Fishy (Morris Fishman) scrounged Exhibition off me for $500 and then won eight in row with him.” Starr corrected his boss, saying the price was $600 and didn’t think he won eight in a row.

Among Starr’s good ones was stakes winner Kitty Girl, who won 24 races. His first victory as a horse trainer came in 1936 but it won’t be listed in any of the chart books. He was licensed only as a jockey’s agent in 1936 but on the side conditioned a horse named Exhibition. He ran the horse in another person’s name. Starr continued the practice while handling the riding engagements of such outstanding jockeys as Pat Remillard, George Seabo, Red Pollard, Frankie Mann and Eddie Litzenberger. What is listed now, and has been since 1952, when he officially became a licensed trainer, is a record unmatched in Canadian racing history.

Once he had turned in his jockey agent license for a trainer’s permit Starr trained for Doug Hatch, Larkin Maloney and himself (he owned and trained his first stakes winner in 1954, winning the Jockey Club Cup Handicap) before joining the fiery Conn Smythe. Together they won two Queen’s Plates with Caledon Beau and Jammed Lovely and two Canadian Oaks victories with Wonder Where and Northern Minx. In the late 1960s Starr parted company with Smythe, then joined J. Louis Lévesque to form a formidable partnership. Starr had trouble pronouncing the names of his new charges, but he never had trouble making them run. L’Alezane, L’Enjoleur, La Prevoyante, Fanfreluche and other great performers came out of the Lévesque-Starr liaison. L’Enjoleur won the Plate then La Voyageuse provided another Oaks Victory in 1978 and Medaille d’Or, the brilliant son of Secretariat, was voted Canada’s champion two-year-old.

At age 85 Starr was still training horses at Gulfstream Park in Florida when he died in March, 1990, after suffering a stroke. Starr was born near Kiev in the Ukraine on August 11, 1905. He was an amiable gentleman, not noted for loquaciousness or boasting of his achievements. He usually shrugged off hard-won success as mere luck. 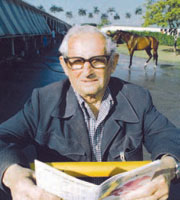