James William Brown epitomizes the hardy pioneering spirit which carried the sport of harness racing out of the bushes and into a major league sport. Born in 1898 in Blythe, Ont., Brown was involved with horses for nearly all of his 70 years. From the late teens until the mid-40s he carried on a draft horse business in Northern Ontario that was responsible for introducing hundreds of horses to lumbering operations. At one time Brown had 500 horses annually working the lumber camps.

His attention turned to harness racing in the late 1930s when, with his brother Bruce, he formed the New Liskeard Turf Club. Brown’s first major win as an owner came in 1941 when Miss Vera Bars, a member of the Hall of Fame, won the Canadian Pacing Derby. Then came The Count B, one of the greatest pacers ever to race in Canada. The Count B started five times in the Canadian Pacing Derby and won it four times, finishing second once. During the height of his career as an owner, his trainer was the late Clifford Chapman, father of Hall of Fame driver John Chapman, who had his first ever race drive at Batavia, N.Y., with a horse owned by Brown. 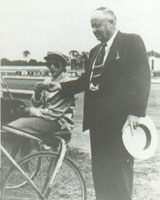 In 1943 Brown began accumulating broodmares and entered the Standardbred breeding business on a large scale. He became a director of the Canadian Standardbred Horse Society in that same year, and served the society for 25 years until his death in 1968. He served three terms as president. As a breeder Brown enjoyed good success. It is believed the highest price he obtained for a yearling was $2,400, a substantial amount at the time. He bred Egan Grattan, a horse he sold for only $800 but which went on to win over $30,000 and become one of Canada’s best pacers. He was a director of the Canadian Trotting Association from 1947 until his death and was instrumental in formulating many of the policies which are taken for granted by today’s racing fraternity, including the licensing and registering of drivers and horses. Brown’s energies were also directed to the operating end of racing. He was general manager during the first attempt to operate an extended meeting in Ontario (at Thorncliffe track in Don Mills) and later acted as general manager for the OJC when harness racing returned to Woodbine Park in 1954. As an owner, breeder, policy-maker and administrator, James William Brown left an indelible mark on Canadian harness racing. 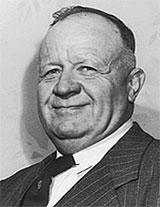