Two coronations took place on June 2, 1953 – one at Woodbine Park on Queen Street in Toronto; the other at Buckingham Palace in England when Elizabeth II ascended the throne.

Canadiana richly deserved her title “Queen of the Canadian Turf” that day when she sprinted to the lead coming out of the gate and cruised to an unchallenged victory in the 94th running of the Plate. Although she would have never won a beauty contest, the swaybacked, long-legged filly was nevertheless an appealing picture for owner and breeder E.P. Taylor. How good was Canadiana that day? “She would’ve won that one with Kate Smith ridin’ her. That’s a good filly; a real good one” was veteran jockey Sam Boulmetis’ observation. He thought she might lap his horse, Avella, which finished 18th.

Canadiana would earn more tributes than any other horse at that time in Canada before she was retired at age five, earning a record bankroll of $117,116. The daughter of Chop Chop and Iribelle was the first homebred to earn more than $100,000.

In 1952 she captured the Coronation Futurity and the Cup and Saucer against the males, marking the first time a filly had swept these two prestigious events. She also won the Princess Elizabeth and stakes races at Hamilton, Ont., and Cleveland’s Randall Park and nine of 11 starts for trainer Pete McCann. She became the first juvenile to be voted Canada’s Horse of the Year. When she finished a disappointing fourth in the Plate Trial Stakes the following spring under regular rider Jose Vina, a jockey change was requested by Taylor. He brought in U.S. great Eddie Arcaro, a move that was hardly necessary as she won with such ease in the Plate. Following her Plate triumph Canadiana shipped to New York to take on the best fillies in the United States, winning the Test Stakes at Saratoga and placing second in the Diana and Gazelle Handicaps. At four she won the Vagrancy Handicap at Aqueduct, N.Y.

Brilliant on the racetrack during a four-year, 62-race career, Canadiana was a failure in the breeding shed. In 15 seasons she produced only one stakes winner – All Canadian. Ironically, All Canadian won the race she had failed in, the Plate Trial Stakes. 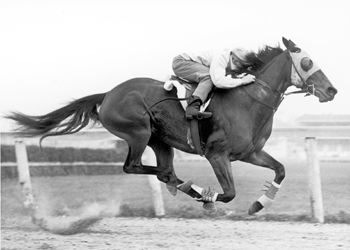