Most harness racing enthusiasts wouldn’t recognize the name Frank Bogash Jr, but between 1912 and 1917 he established himself as one of the great race horses in the world. When the nine-year-old pacer sped through a mile in 1:59 1/4 in 1914, he became the first Canadian-bred horse to crack the two-minute barrier. A year earlier, as a member of legendary trainer Thomas Murphy’s stable of Grand Circuit campaigners, “Old Frank” was the year’s largest money-winner, picking up $23,325.

Bred in Sand Hills, Que., by E. C. Warner, Frank Bogash Jr spent his early life as a workhorse, pulling plows, harrows and cultivators, and even being ridden under saddle. He was the product of unfashionable breeding, a son of Frank Bogash (named after a prominent trainer-driver of the 1800s) and from Phyllis Stanford, by Stanford (a horse bred by Governor Leland Stanford of California). It was a breeding of a male-line Almont mare to a male-line Almont stallion. Trained and driven by Fred Pickle he made his first racing start as a 7-year-old in 1912 and was 13 for 13 over the half-mile tracks of Canada, New York and New England. Thomas Murphy heard of the Canadian horse who could “step away better than 2:10 on any kind of a cow path” and bought him for the princely sum of $7,500. Frank Bogash Jr then proceeded to set a world record (1:59 1/4) for a pacing gelding in1914 in Detroit. He paced the last half-mile in 58 1/4 and the last quarter in 28 1/4. The record stood for 14 years until another Hall of Famer, Winnipeg, came along to beat it.

Murphy described him as a “true race horse. His rush at the end of a heat was terrific in its velocity.” In his first year on the Grand Circuit, Frank Bogash Jr won 10 of 16 races and eight of 10 the following year. This was an era when races consisted of numerous heats. Of a total of 184 contested heats, he won 123, was second in 36 others. He was “unplaced” in just three races. He finally ran out of competition. Barred from most class races by his record and being a gelding, his earning power decreased. Purchased by Ed Swartz of Niagara District in Ontario, he finished his career with exhibition races, setting track records at small ovals around Ontario. He was later involved “in a trade in which a cow was the principal consideration.” While hitched to a bobsled bearing a barrel of water and “perhaps realizing the state of servitude to which he had been reduced,” Frank Bogash Jr ran away. Trying to draw the sled through a snow bank, he fell and fractured a leg and had to be humanely destroyed. 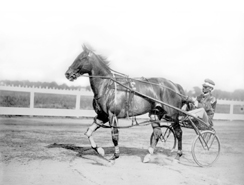