Keith Waples was credited by many of today’s harness racing stars as the best to ever sit in a sulky, and a man who made an enormous contribution out of the bike as well, two reasons why he is a member of the Halls of Fame in both Goshen, N.Y., and Canada. In a poll conducted by The Canadian Sportsman, racing fans and readers voted on who was the “Greatest Canadian Harness Horseperson” who ever lived. They gave Waples the nod over the other four finalists – Doug Brown, John Campbell, Joe O’Brien and his cousin Ron Waples. Arguably, Keith deserved this accolade. Track historian Bob Heyden of The Meadowlands, heard the reverence in the voices of drivers countless times. “Try talking to Herve Filion, Ron Waples or Bill O’Donnell about Keith, and you’ll get a real sense of what kind of horseman he was.”

Check out Keith’s driving and training credentials, beginning with Mighty Dudley. Waples became the first driver to break the 2:00 mile barrier on Canadian soil with Mighty Dudley (1:59 3/5) at Richelieu Park in 1959. A few years later he captured the Roosevelt International with future Hall of Fame great, Tie Silk. Pacing’s biggest prize, the Little Brown Jug, went to Waples in 1972 when he steered John Hayes’ Strike Out to victory at the Delaware, Ohio, oval. It was the first time a Canadian-owned horse had won the Jug. Besides setting a world record in the second heat that day, Strike Out went on to win the Adios Pace and Prix d’Éte. In 1973 Waples won several three-year-old pacing stakes with temperamental Rob Ron Ritzar. Among his other outstanding champions were: Alberts Star, Choir Boy, Duke of Decatur, Ben Boy, Blaze Pick, Zip Tar, Rob Ron Ronnie and Rob Ron Tarios. Keith captured driving titles at Old Woodbine, later Greenwood, and at Mohawk. He toured North America in 1962 as staff trainer and driver for the powerful Miron Brothers stable.

Officially, Standardbred Canada statistics credit Waples with having reined 3,207 winners and merely $6.7 million in combined purses, but these numbers don’t tell the whole story. He flourished during a period when such totals weren’t compiled, and when the cash on offer was miniscule in comparison with today’s nightly bonanzas. Talking to Toronto Star columnist Jim Proudfoot for an article in The Sportsman in 1998, Waples recalled his beginnings, driving as a 12-year-old at the Sundridge fairgrounds and winning his first race in 1936. “I’d been jogging horses around the farm at Victoria Harbour since I was about four, but never in a race. Now we were at Sundridge, where the soil was sandy and they’d had a lot of rain. My dad weighed about 240, so he figured our horse, Grey Ghost, was in for a tough time. So he said to me, ‘Son, see what you can do.’ Well, actually we won three heats.” 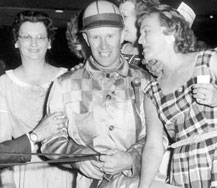 Waples remembers winning nine heats at Simcoe one afternoon and nine more at Strathroy the next day. “Those were never recorded. Hardly any ever were. So I’ve never been one to get too excited about statistics. They’re a recent development- since 1948, I believe. And I won a slew of races before then.”Statistics, however, hardly give a glimpse into the tenacious career of this horseman who perhaps is one of the few drivers, maybe the only one, to have entered the winner’s circle in each of the past seven decades. Yes, that’s what he did April 27, 2000, at Kawartha Downs with Emery Flight at age 76.

Seven years later the senior citizen of the sulky was still as eager as ever on a windy, rainy night, which would not keep him from doing what he loved best at Kawartha and the Ontario Sires Stakes Grassroots finals. Dressed in his familiar blue and gold, the 83-year-old looked in fine form as he guided Junior K through his pre-race warm up prior to the $100,000 OSS showdown for three-year-old pacing colts. Fellow Hall of Fame driver Doug Brown was in the bike in winning the final for the Waples’ owned and conditioned ridgling. “It’s a thrill to drive for Keith,” said Brown. “I grew up watching him drive and train. He’s just a terrific all-around horseman. Whenever you get a horse from Keith you know you’re going to get a good one, and this colt proved that here tonight.”

During his career Waples took time off from the daily routine to assist in the front-office operations of developing harness racing in Ontario and British Columbia. He and his brother Murray, Jim Keeling of Owen Sound (a Hall of Fame inductee as a builder) and other partners built and operated Orangeville Raceway and then moved west to bring major league harness racing to B.C., building Cloverdale Raceway(now Fraser Downs) in Surrey and Sandown Park on Vancouver Island.

In 2002 Waples said he had reduced his work load, “training four or five. I’m 78 now. I drove a few last year. Win four or five.” But retire completely? “Never retire. Don’t even think about it. And keep busy. I tried cutting back in the 1970s, which was a great mistake. It didn’t take long for me to get sick of doing nothing. I was back training and driving real soon. It boils down to one very simple thing: A fellow has to have a reason – horses that need feeding, for example – to get out of bed in the morning.”