When Lucien Laurin died author and journalist Joe Hirsch wrote in his Daily Racing Form column that the eulogy on the tablet should simply read: “He trained Secretariat.” That would be enough. Hirsch added, “The record says he trained him pretty good. He sure had him right for the classics: three races and three track records, though one he certainly made in the Preakness was never officially recognized. Secretariat’s performances in the three races collectively (the Kentucky Derby, Preakness and Belmont) are the finest in Triple Crown history and could serve as a memorial. 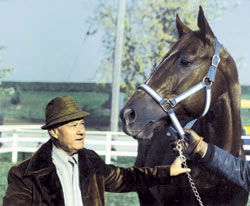 Laurin, the silver-haired ex-jockey from Saint-Paul, Que., admitted that the pressure of training the magnificently bred and looking thoroughbred was not only difficult, but unbelievable and unparalleled, especially after it had been syndicated for a world-record $6 million. “I never trained a horse as hard as I trained Secretariat. But he needed it. He was a big doer, a big bruiser.” The first horse to win the historic Triple Crown in 25 years (Citation won it in 1948), Big Red dazzled the world with his 31-length victory in the Belmont Stakes. Laurin thought his best race might have been in the Marlboro Cup when he set a world record for nine furlongs and beat an outstanding field of older horses that included stable mate Riva Ridge, Cougar II, Onion, Key to the Mint and Kennedy Road.

Laurin led Secretariat to horse of the year honors in 1972 as a juvenile and again at age three when he concluded his career at Woodbine on the turf in the Rothman’s Canadian International Championship. Laurin’s training career was already established when he took over Penny Tweedy’s Meadow Stable in 1971, succeeding his son Roger, who recommended him for the job. The year 1947 was also a pivotal one for the little man from Quebec. He came in contact with prominent sportsman and owner Reginald Webster, who took a liking to Laurin and his training methods. The pair enjoyed immense success for several years. By 1958 Laurin had developed Quill, winner of juvenile filly honors that year. In 1966 Amberoid won the Belmont Stakes, preventing Kauai King’s bid for the Triple Crown. 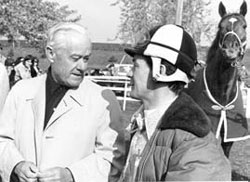 In his first year with Meadow Stable he developed the champion two-year-old in North America, Riva Ridge. Laurin would come close to sweeping the Triple Crown the next year with this colt as he won the Kentucky Derby and Belmont but lost on a sloppy track at Pimlico in the Preakness. Riva Ridge was champion older horse at age four. Over a long and distinguished career that led to his induction into the Hall of Fame at Saratoga, N.Y., Laurin saddled thirty six stakes winners and developed countless other stars, like Angle Light, the Canadian-owned colt that upset stablemate Secretariat in the Wood Memorial, and Tumiga.

Laurin’s racetrack career began in the late 1920s in Montreal, “walking hots.” He got his jockey’s license in 1929 but had moderate success. He did ride the winner of the 1935 King’s Plate at Blue Bonnets. When he stopped riding, he had won 161 races. Weight caught up to him in 1942, so he turned his talents to training, working the old New England circuit, winning 16 races in his first year and building that to 42 wins by 1946. He said that one of the luckiest things that happened to him was that he got too heavy to be a rider. Laurin died at 88 after complications from hip surgery on June 26, 2000, in Miami.