Since 1938 J.C. (Bert) Cameron raced horses at some 50 tracks in Canada and 25 tracks in the United States. A native of Shawville, Quebec, and resident of Smiths Falls, Ont., Cameron had a large influence on racing and breeding in the two provinces. He acquired his first harness horse in 1937 in a trade with an old horseman named Bernard Grant. Cameron traded a new truck for some old harness, an old race cart and the horse. According to Cameron, his trainer, Ed McKeller, said the harness and the cart were worth twice as much as the horse.

Ezra Blue, Cameron’s second purchase in 1938, vaulted him to Canadian harness racing prominence. Cameron paid $250 for Ezra Blue as a three-year-old and campaigned him with distinction for eight years, beginning June 23, 1939, at Chesterville, Ont. It is reported that Cameron said on more than one occasion that this horse helped finance his automobile business during difficult times. Ezra Blue set numerous track records, captured feature races at Saratoga and Roosevelt, and in 1940 won 21 straight heats while racing at Ontario, Quebec and New York tracks. He was also a successful sire, particularly as a sire of broodmares. His 500-acre farm near Smiths Falls produced hundreds of top standardbreds. His stallions included Ezra Blue, Slagle Hanover, Leland Hanover and Ezra’s Pat.

Ezra Deen was one of Canada’s leading pacers during the 1950s. He was the first Canadian-bred horse to earn more than $100,000 in career purses for Cameron. He raced until he was 14 years of age and campaigned against such outstanding pacers as Dottie’s Pick, Diamond Hat and Good Time.

In 1974 he was recognized by the Ontario Harness Horsemen’s Association as Senior Citizen of the Year for his work and contributions to the standardbred industry and the sport of harness racing. 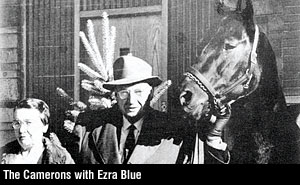