Randall initially entered the racing business back in 1919 and went on to become the dominant figure during the 35 years he directed the Ascot Jockey Club of Vancouver and the Vancouver Thoroughbred Association. The long-time operator of Exhibition Park, formerly Hastings Park in Vancouver, also built Lansdowne Park, the Willows track in Victoria and also operated Brighouse Park in Richmond and Colwood on Vancouver Island.

Born September 25th, 1881 in Bruce County, Ontario, Mr. Randall originally went to Vancouver in 1914 where he operated a stove business until he entered the racing field. 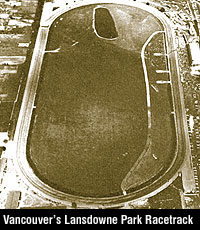 His contributions to the sport of racing were numerous. He was among the first to install the photo finish camera and later backed Clay Puett in the construction of the first closed-in electric starting gate in 1939.

Mr. Randall was a major contributor in helping to improve thoroughbred breeding in the province. He was instrumental in importing Marcus, the foundation sire of B.C. breeding, from Great Britain, and gave another outstanding sire, Shasta Pebble to Vancouver Island breeders. Besides his track interests, Randall developed the Ascot Stock Farm and Ascot Dairy Farm on Lulu Island.