Among the sagacious decisions made by E. P. Taylor as he assembled a breeding dynasty in the late 1940s, was the $38,000 purchase of a yearling at the Keeneland sales in 1948. He was by the prominent stallion Bull Lea and out of Our Page, a mare that would later become champion broodmare.

His name was Bull Page, who was judged Canada’s Horse of the Year in 1951 after a sensational stakes-winning season. However, Bull Page’s race record would be insignificant compared to his ability as a champion stallion. Two of his offspring, both members of the Hall of Fame, stand out – New Providence, winner of Canada’s first Triple Crown, and Canadian Oaks and Queen’s Plate winner Flaming Page, the dam one of the world’s great racehorses – Nijinsky II. Some of his other leading stakes winners included Stole The Ring, Censor, Bulpamiru, Bull Vic and Oaks winner Air Page.

When Taylor called his trainer, Bert Alexandra, and told him of his purchase and what he had paid, Bert exclaimed, “What, is he lame in all four legs?” By Canadian standards $38,000 was a lot to pay for a horse, but according to Bert the colt should have cost a lot more. It wasn’t until he saw the colt that he realized why his boss had got Bull Page for such a low figure. Bull Page was straight in front and short in the pasterns, conformation defects that are decided liabilities in racehorses. The colt’s first workout was done in sensational time, but he came back limping. Alexandra was overwhelmed by the natural speed and ability Bull Page possessed and said, “This colt will make the world forget about Citation (another son of Bull Lea). if he remains sound.”

His soundness was a factor in Bull Page not racing at age two. As a 3-year-old he broke his maiden at Gulfstream and won two allowance races at Jamaica, N.Y. It was as a 4-year-old that he attained his top form for trainer Pete McCann, winning the Canadian (International) Championship, the Autumn Cup, setting a track record at Thorncliffe, winning three other races and placing several times in stakes events while giving away weight to his rivals. He was unplaced twice in 16 starts to earn Horse of the Year honors. 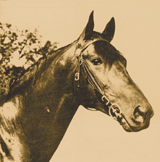