Chop Chop is one of only three horses to sire four Queen’s Plate champions – the filly Canadiana in 1953, the first Canadian-bred to earn more than $100,000; Lyford Cay in 1957; Victoria Park in 1960, who went on to sire three Plate champions himself, and Blue Light the following year. However, in his first five years in Canada he was basically ignored by breeders before he suddenly became this country’s leading stallion from 1959 to 1963.

Following his retirement in 1945, Chop Chop was leased by Gil Darlington from a Kentucky breeder to stand at his Trafalgar Farm near Oakville. Chop Chop had run against the best in the United States and in 11 starts was out of the money only once, when he lost his jockey at the gate at Aqueduct, N.Y. It was said, he would never win a beauty contest, and, for that matter, neither would his offspring. Despite his lowly $250 stud fee, he rarely covered a top mare, and every time he did get a quality mare he sired a good race horse. Subsequently, he covered only few mares each season, and from his first five crops he had an average of only five horses per year at the races.

In 1952 he didn’t cover a mare but two events would soon change his breeding career. E.P. Taylor, who had acquired him in a dispersal sale, stood him at his National Stud in Oshawa. The following year he became a hot commodity when Canadiana won stakes in both the United States and Canada, including the Queen’s Plate for Taylor. That year he was bred to more mares than he had serviced in the five previous years. Besides his four Plate champions, Chop Chop’s other stakes winners included Kandi Kid, Chain Reaction and Brazen Buz. 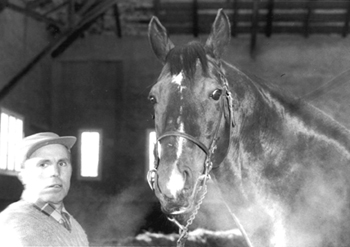