Statistics compiled on the leading Canadian thoroughbreds – winners, sires, broodmares and their breeders – during the 1920s and 1930s list Joseph Seagram’s highly productive broodmare Gallant Kitty as the leader in her category. She was the champion broodmare of 1928 and was the cumulative leader during the 1925 to 1937 time frame.

Gallant Kitty was a foal of 1916, out of the mare Kate Kittleberry. But her sire’s identity is rather uncertain. It might have been the imported stallion *Galatine, but likely Seagram’s great stallion Havoc, who sired a record four King’s Plate winners – Inferno, Slaughter, Seismic and Mandarin. Despite the confusion of her parentage, Gallant Kitty was a superb producer during her era. But until Young Kitty came along she was considered not a horse of great quality.

Young Kitty was her most outstanding runner. An extremely swift filly, Young Kitty won the 1928 King’s Plate by an awesome 12 lengths and 10 of her first 11 starts. She also won the Clarendon, Breeders’ Stakes, Connaught Cup and William Hendrie Memorial Handicap. Gallant Kitty’s other top runners included Gay Parisien, a gelding who started 209 times, winning 51 races, and Gay Sympathy, who won the Breeders’ Stakes and finished third in the 1935 King’s Plate. 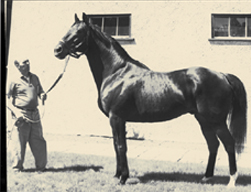