A half mile to go and the favorite was running last. Then the crowd at Toronto’s Dufferin Park would come alive with excitement as track announcer Buck Dryden shouted the familiar words: “And here comes Youville!” Horse after horse would be headed by Youville on the final run around the half-mile oval until it was Youville by half a length. This scene was enacted many times during the 1940s and early 1950s.

Youville’s thrilling come-from-behind rushes and consistent victories made him loved by racing fans in Ontario as few horses have ever been. How does one measure greatness in a horse? If you are not guided merely by ability to win stakes races and money won, then Youville qualifies for the adjective. In a career that spanned 13 years, the gelding made 284 starts and won 49 of them. In a display of endurance he finished second 30 times and third 49 times.

He became known as the savior of the $2-dollar bettor, increasing the size of his fan club with every victory. One anonymous lady sent the horse a two-pound box of chocolates every Christmas with a card inscribed: “To my favorite horse, Youville”.

Bred in Manitoba by R. James Speers, Youville was foaled in 1939, coming into a world filled with fear of a likely war in Europe. In the dark year of 1941 he raced on the tracks of Western Canada, winning once and finishing fourth. Later he was claimed and then sold to Ontario-based trainer Willie Russell for a reported $600. At the time the horse was considered strictly a sprinter, but the canny horseman turned him into a genuine router with a carefully-planned program of long slow gallops followed by a fast last half mile. He became popular with the fans, but to the Russells he was one of the family.

Russell never forgot the joys Youville had given him and neither did the world of racing. In 1955, the year Dufferin Park was torn down, a special day was staged to honor the aging gelding, who was paraded with a cooler, emblazoned with the words: “$50,000 – the hard way”. And the hard way it was – 284 starts. In 1961 he repeatedly injured himself, hitting fences and trees he was no longer able to see and was reluctantly put down, ending the life of a horse that had thrilled thousands of racing fans over a decade. 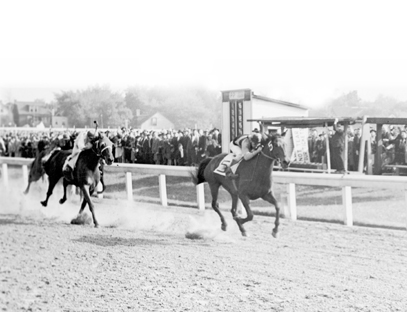