There are jockeys who have won more races than Chris Rogers but there are not many who were better. He rode the winners of 2,043 winners in his career, but that does not begin to tell you how good he was. Riding great Eddie Arcaro often said the native of Hamilton, Ont., was one of the most complete riders he had ridden against or watched.

During a 35-year riding career, Rogers had a knack of “stealing” races on long-shots. He was one of the best at setting a false pace; relaxing his horse while playing possum, then digging into his mount to win a photo finish.”As I always told the boys, you can win more races in the final twenty yards than at the eighth pole,” he’d say. While he had the best horse in the King’s Plate at Woodbine in 1949, Epic, E.P. Taylor’s first of many Plate winners, opposing owners or trainers credited him with Plate “thefts” when he outfoxed foes in 1950 and 1954. “We had the best horse, but the other horse had the best rider,” said Double Blue Stable’s owner Joe Holbeck, when Rogers’ mount, McGill, beat his horse, Sir Strome, by a head. Four years later, riding 11-1 long-shot Collisteo, he won by a head over, Queen’s Own. “He made a bum of our boy. It was one of the big rides of his life,” said Taylor’s trainer, Pete McCann. 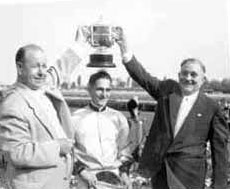 Collisteo’s 1954 win was a crowning glory

Rogers, however, wasn’t always successful in lulling foes. He was aboard 47-1 outsider Lincoln Road in the 1958 Kentucky Derby, setting a well-judged pace while saving ground much of the way, but unable to withstand Tim Tam’s surge in the final yards. It was much the same in the Preakness Stakes, leading but unable to hold off Tim Tam at the wire. Rogers was 17 when he won his first race, aboard A.J.(Art) Halliwell’s Bon Marche, on July 14, 1941,at Fort Erie. Halliwell, who owned Rogers contract, leased him to trainer Paul Kelly in the fall of 1941 and Rogers went to Florida that winter. He returned to Ontario in the spring of 1942 then went to New York, where he was an immediate success, finishing second to Arcaro in the jockey’s standings at the old Jamaica track. He soon became a regular at major U.S. tracks. 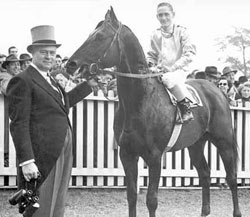 Rogers’ career had it ups and downs, mainly because of an alcohol problem which prevented him from reaching the heights a man of his talent should have. After joining Alcoholics Anonymous he was enjoying a successful comeback, which in itself was a truly amazing story. In the fall of 1976 he won the important Grey Stakes on Dan Krever’s Do Lishus. Rogers had also won the Grey in 1950 with Argyle and 1969 with Dance to Market. He was having one of his better years, having won 54 races that season. However, Rogers was taking treatment for lung cancer. It was inoperable. Shortly after his September win in the Grey, Rogers suffered a broken leg and died at age 52 of lung cancer on October 29. In 1977 The Jockey Club of Canada awarded Rogers a Sovereign Award of Merit and in 1988 his son, Robert, accepted the Avelino Gomez Memorial Award on behalf of his late father. The award honors a jockey’s contribution to Canadian racing, 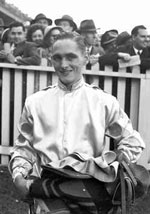