Duncan MacDonald, the Sydney, N.S., horseman had a history of making shrewd deals when buying horses, and Armbro Nesbit had to rank among his wisest purchases. For $24,000, MacDonald selected the son of Bye Bye Byrd at the 1971 yearling sales in Harrisburg, Pa.. It was far more than the $900 MacDonald paid in 1964 for trotting millionairess Fresh Yankee, but the end result was similar. Bred by the Armstrong Bros., of Brampton, Armbro Nesbit raced three years, earning $625,964 and retired with 35 wins, 12 seconds and 11 thirds in 76 starts.

He was one of the fastest Canadian-bred and owned pacers of his era. He took a lifetime mark of 1:56.4 at age three at Yonkers, an exceptional clocking for a half-mile oval. The USTA later granted Armbro Nesbit an experimental speed rating of 1:55:1, the time they felt the pacer could attain on a mile track. That rating in 1973 was the second-highest handed out by the USTA that year.

MacDonald was actually looking for a hobby horse when he bought Nesbit. He broke, trained and drove the colt, winning 10 of 13 starts in 1972 when he took a win-race record of 1:59.1. His wins included the L. B. Sheppard, Hanover-Hempt Farms, Andy Kerr Memorial, The Count B, Canadian Juvenile Circuit Stakes at Blue Bonnets and Rideau Carleton, the Canadian Juvenile Circuit Final and Pennsylvania Sires at The Meadows. Armbro Nesbit won nine times in 31 starts at three, taking the L.K. Shapiro, Commodore, Western Hanover Colt, Batavia Downs Colt and Pennsylvania Sires Stakes. His stakes credits also included seconds in the Little Brown Jug and Cane Pace, two legs of pacing’s Triple Crown. His season earned him Three-Year-Old Pacer of the year honors in the CTA poll.

In his final campaign at age four in 1974, Armbro Nesbit won 16 of 32 starts and was voted the Four-Year-Old Pacing Champion in North America. He was a dominant force among the best aged pacers in training, beating them in the U.S. Pacing Championship, Empire Pace, Old Glory Pace, Provincial Cup, Hamilton and the Beaches Stakes. He was syndicated for $1 million and stood at Hanover Shoe Farms in Pennsylvania. His offspring have included world champion Armbro Vibrant, while his daughters have impacted the breed by producing 74 performers with records of 1:55 or faster, including the $2.5 million winner Beach Towel p, 3, 1:50 and the $1 million winner T Ks Skipper p, T1:49.2. 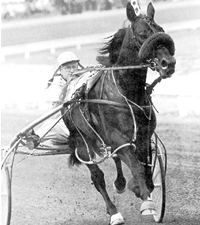