Some horses in today’s era of lucrative purse money are measured by what they have earned. Others are measured by speed. And thankfully, some are measured by heart, stamina and determination. It was heart that earned Miss Vera Bars induction into the Canadian Horse Racing Hall of Fame.

The gallant bay daughter of another member of the Hall of Fame, Grattan Bars, won’t appear on anybody’s list of leading money earners. In seven years of campaigning she earned less than $6,000. Nor will she appear on any list of the fastest paced miles. Her best clocking was 2:05 3/4. But in the dark period of the Second World War, between 1939 and 1945, Miss Vera Bars paced her way into the record books at small towns all over Ontario, Quebec and western New York. Under the guidance of another member of the Hall of Fame, Jim Brown of New Liskeard, Ont., Miss Vera Bars went to the gate 249 times and came home a winner in 124 of those races. During her career she raced at 41 different race tracks.

Miss Vera Bars set numerous track records and was the only mare to ever win the Canadian Pacing Derby. She captured the 1941 renewal of the event at New Hamburg, Ont., with Gidd Litt driving. That year was her most successful season as she won 31 of 46 starts for purse earnings of $1,653 and 80 cents. 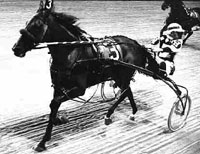