Prior to his death in 1972, G. Max Bell ranked only behind E. P. Taylor as the Canadian most prominent on the international thoroughbred horseracing scene. Bell purchased his first horse, Mac Aurelius, in 1936 from Johnny Longden, himself a Hall Of Famer, who said of Bell: “I owe everything I have to that man. He was the finest man I have ever met in racing.” Mac Aurelius won a $300 claiming race in Regina, and Bell was hooked. 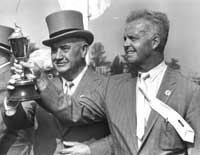 During the next 36 years, operating mainly in partnerships with close friends, Max Bell became a force to be reckoned with in racing in the United States, Canada and Europe. As an owner, or part owner, Bell won the Irish Sweeps Derby Classic with Meadow Court, the Queen’s Plate with Merger and the Hollywood Derby with Four And Twenty. His horses accounted for numerous stakes races in Alberta, Ontario and Manitoba. Alberta Ranches, which he founded with partners, was among the top stables operating in California in the late 1950s and early 1960s. Bell was instrumental in bringing many important stallions to North America from Europe, including Indian Hemp, (sire of champion TV Lark), Blue Butterfly, (Ireland’s champion two-year-old filly), Dominion Day 2nd, Lustrous Hope, Gilmore, Psyche’s First and Tall Chief 2nd. They are a few of the many important stakes horses which also carried Bell’s silks to important victories.

Max Bell, who took over the near-bankrupt Calgary Albertan newspaper on the death of his father in 1943, and built it into a publishing empire, was an astute student of bloodlines and an active thoroughbred breeder. In partnership with Frank McMahon, he founded the showplace Golden West Farms thoroughbred nursery at Okotoks, Alta., which is by far the most elaborate thoroughbred breeding farm between Ontario and British Columbia. Fashionably bred matrons he moved to Golden West became important foundation broodmares for the local breeding industry. Queen’s Plate winner Merger was bred there. Bell was also active in racing at the boardroom level. He was president of the Balmoral franchise in Chicago, and a director at Tanforan, California. In the history of Canadian racing, up until the time of his death, no Alberta resident had ever had such a far-reaching effect in horse racing as G. Max Bell.