The Jack Diamond success story began with his arrival in Vancouver in 1924, a 16-year-old boy from Poland. His interest in horse racing began during the Depression when Diamond collected $14 on a $2 bet on his first visit to a racetrack. It picked up speed in 1936 when he bought his first racehorse – the first of many. Ten years later horse owner Diamond entered the management end of racing when he became a director of the British Columbia Turf and Country Club, which operated the old Lansdowne track in Richmond.

In 1961, B.C. Turf amalgamated with the Ascot Jockey Club, owned by the Sam Randall family. The B.C. Jockey Club came into being and racing was concentrated at Exhibition Park under Diamond and Bill Randall as co-presidents. Diamond was recognized as the strong personality behind the success of Exhibition Park, which saw a dramatic increase in pari-mutuel handle. He presided over two major expansions at Exhibition Park, the last coming at the end of the 1975 season.

Diamond was a life member of the Horsemen’s Benevolent and Protective Association, the B.C. Breeders Society and a member of the Canadian Thoroughbred Horse Society. He initiated the practice of purchasing class racing and breeding stock in the U.S. and returning them to British Columbia for sale to local owners at cost. Some of the notable horses to race at Exhibition Park because of the practice were Jeff D., Grand Bolero, Keep Your Promise and Decidedly D. Diamond also maintained a racing stable of his own until 1994, a stable which included such stars as Jeff D., April Wine, Battling Craig, 1974 Horse of The Year at Exhibition Park as a three-year-old, and the 1971 B.C. Derby winner, Command Module. Diamond won the B.C. Derby four times.

An honor bestowed upon Diamond in 1975 resulted in The Jockey Club, at the request of the Horsemen’s Benevolent and Protective Association and the B.C. Thoroughbred Breeders Society, renaming the B.C. Futurity the “Jack Diamond Futurity.” Ken (Sonny) O’Connell, HBPA president, noted that Diamond “has been honored by outside groups and it is high time that racing honors this man who has given so much to our sport. This is a way that will last – perpetuating his name with our oldest and most prestigious stakes race. Diamond died in March, 2001, at the age of 91. 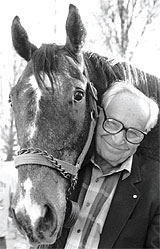