Hendrie, through the family-owned Hendrie Cartage Company, first became associated with The Ontario Jockey Club in 1932 when the trucking firm vanned horses. During the 1930s George Hendrie became involved with the operational activities of racing, and served for a time as a Steward, representing The OJC. In 1943 George Hendrie was named a Director of The OJC, then was asked by E.P. Taylor in 1953 to serve as its Managing Director. It was during this period that Taylor was re-aligning and consolidating racing in Ontario, taking it from the “leaky roof circuit” to its present status. 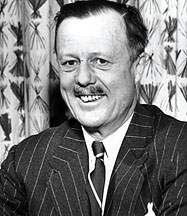 Hendrie was a “great conciliator” said an admirer, just what was needed during the difficult periods of growth. “I can think of no other man who was as well liked in racing as George Hendrie,” said Jim Coleman, of Southam Press. “Everyone, from stablehands up, loved and admired George Hendrie.” It could be said that George Hendrie was more comfortable sitting in a tack room, talking racing, than he ever was in the boardrooms of racing.

George Hendrie, who was named Honorary President of the OJC in 1971, was a charter member of the Ontario Racing Commission. He was active in racing until his death in October, 1988. He raced a modest stable and came close to winning the Queen’s Plate in 1974 when the famous brown and yellow silks of the Hendrie family finished second when Native Aid was upset by Amber Herod. 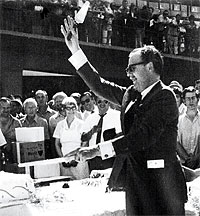