Bill Herbert was born in Niagara Falls, Ont., where his great affection for horses led him to the track. His first horse, All Right, captured 11 successive races in the 1920s. Looking back to his first race on a little track near Toronto, whose name he can’t remember (“I had to go around it three times”), Bill acknowledges that the business has changed quite a bit since he began racing in 1924 “for nothing but the love of it”. During those years Bill followed the country fair circuit and raced whenever he could. He first raced at Western Fair in 1928, long before a permanent track was established.

During World War II Herbert was the lone horseman training at Western Fair. Although the grounds and buildings were being used by the Department of National Defence, he leased the barn and track with an agreement to turn over his facility to the DND if requested. His dedication paid off. Today horses from the William H. Herbert Stables in Lambeth, Ont., rank with the best in North America for breeding and performance.

All his horses are registered in both the United States and Canada, and each bears the Herbert name. In the late 1970s the Herbert stable had about 100 horses. Bill’s son, Jack, raced regularly at Western Fair in addition to helping Bill train the colts. He handles most of the driving assignments for the stable.

Even though he had to give up driving in 1976 when he turned 75, Bill is far from considering retirement. He still gets out to train his colts every day, and he’s content just to be with his horses. “I love all kinds of horses. It doesn’t matter whether they’re big, heavy work horses, you know, Clydesdales, or pedigreed animals – horses are my life. I’m very happy with what we do, and it’s so wonderful to make a living and do the things you really want to do”. 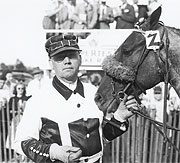