To Sydney J. Langill, the sport of thoroughbred racing has always been a labor of love. For a period of 13 years, from 1961 to 1974, Langill waged a game battle to keep thoroughbred racing a viable sport in Montreal in the face of stiff competition from harness racing. Finally at the end of the 1974 season a terse announcement from the Mt. Royal Jockey Club stated it was no longer “feasible” to stage thoroughbred meetings in Montreal. It was the end of an era but no one had ever fought a gamer battle than the quiet, pipe-smoking gentleman who earned everyone’s respect during that period when a thoroughbred meeting was staged annually at Blue Bonnets Raceway.

As president of the Mt. Royal Jockey Club, Langill was the driving force behind a sport that faced insurmountable odds. Yet he never wavered in his conviction that thoroughbred racing could make a go of it in Montreal and his enthusiasm was infectious. Year after year he managed to drum up the ingredients for a thoroughbred meeting and he was fondly referred to as “the gallant old gentleman of thoroughbred racing in Montreal.” A retired president of a Montreal investment brokerage firm, Langill devoted long hours to the sport of racing at an age when most people have long given up active business interest. But while Langill experienced his share of heartaches as a racing executive, he also had many pleasurable moments in racing.

As the owner of a 475-acre farm in suburban Senneville,Que., Langill was a breeder of note for many years. With typical modesty, Langill, whose lineage goes back to County Cork, described himself as a “small” breeder. Yet he came up with Langcrest, who won 15 of 36 career starts including seven stakes races and earned $109,699. In 1964 Langcrest finished second to Northern Dancer in the Queen’s Plate. Langcrest would be inducted into the Hall of Fame in 1984. A son of Nearctic, Langcrest’s accomplishments were all the more pleasing to Langill as he was out of the mare Peerless Mary, which Langill himself purchased for a paltry $1,900 at Keeneland in 1955.

Baseball’s Leo Durocher once stated that “nice guys finish last.” He could never have met Sydney J. Langill, whose contributions to the sport of thoroughbred racing in Canada are so many. 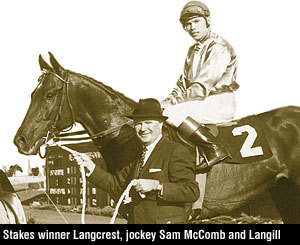