Born just four years after Canada became a country, Colonel R. S. (Sam) McLaughlin became one of the most successful Canadian businessmen in history. Founder of the automobile industry in Canada, McLaughlin brought to racing the same bold approach and capacity for management with which he was so successful in the business world. It was he who established Parkwood Stables, a lush rolling farm a few miles north of his native town of Oshawa, Ontario. The farm was to produce some of the top horses of the 1930s and 1940s.

Horses were initially a hobby for “Colonel Sam”, but one that quickly turned into his passion. He began entering his horses in show competitions in 1926 and went on to win a total of 1,500 ribbons and more than 400 pieces of silver plates and trophies. McLaughlin expanded his interest in Thoroughbred racing by building Parkwood Stables and imported the stallion Osiris II to stand at Parkwood. The stallion’s significant contribution to Canadian racing and breeding was undoubtedly his daughter, Iribelle. She was to become the foundation mare of E. P. Taylor’s National Stud and figures prominently in the pedigrees of Victoria Park, Canadiana, Northern Queen, Victorian Era and many other outstanding runners. McLaughlin also imported Fairaris, who won the Peter Pan Handicap at Belmont Park, N.Y., in McLaughlin’s bright gold, red and blue silks and later stood at Parkwood Stables. He sired many top runners including the Canadian champion King Maple.

McLaughlin’s silks appeared in the King’s Plate for the first time in 1933 when he ran a two-horse entry. Before his last Plate victory in 1947 with Moldy, he would win two other Plates. Kingarvie, as odds on choice, won the year before and retired as Canada’s richest thoroughbred and later was inducted into the Hall of Fame. Sam’s first Plate victory came in 1934 with Horometer, considered by horseman at that time as one of the best horses ever born in Canada. He certainly was the best bred by McLaughlin. In the King’s Plate of 1934 he went to the post at the prohibitive odds of 1-20 and rewarded fans with a payoff of just $2.10. Coasting home with his ears pricked, Horometer won by four lengths, breaking the old Plate record by a full second. Horometer would be inducted in Canada’s Horse Racing Hall of Fame in 1976.

In 1950, McLaughlin, nearing 80 years of age, sold his beloved Parkwood Stables to Windfields Farm’s E. P. Taylor. The Canadian breeding industry might have had a much longer way to go to achieve full maturity if it were not for an automobile man named McLaughlin. 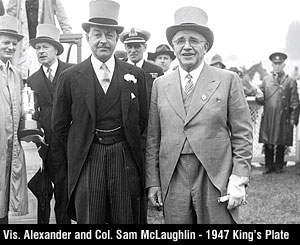