The Province of Quebec had long been a hot-bed of harness racing. One of the people who played a key role in putting that province in the forefront of the sport was the late Adrien Miron. As an owner, Miron’s bright orange and red silks were a familiar sight in winners’ circles across North America for more than a dozen years. As squire of the 700-acre Miron Farm at St. Augustin, Adrien developed a first-rate breeding operation which resulted in his young racing stock campaigning not only in Canada and the United States but Europe as well.

Along with his brothers, Adrien Miron built up an enormously successful cement business. And when the Mirons became interested in harness racing in the mid 1950s, they plunged headlong into the sport with the same zeal that characterized their business successes.

At various times, such outstanding horses as Tie Silk, Champ Volo, Blossom Time, Gerry Mir, Murray Mir and Mr. Baldridge campaigned for the stable. Tie Silk was the individual star of the Miron stable, winning the 1962 International Trot at Roosevelt Raceway, N.J., and earning close to $400,000 in his illustrious career. Following his retirement from racing Tie Silk became a top stallion at the Miron Farm. Gerry Mir was only the third horse in harness racing history to achieve two-minute victories on both the pace and trot. Blossom Times was an outstanding race mare while both Murray Mir and Mr. Baldridge were sold to European interests for breeding following the end of their racing careers.

Despite his successes on the racetracks, Adrien Miron’s powerful stable rarely made much of a profit and he was a staunch advocate of more provincial government aid to the breeders of Quebec. Only in 1968, after 10 years of operation, did the Miron Stable show a profit when their horses earned close to $500,000.

The love of harness racing was always strong in Adrien’s blood and he persevered in his aim to help establish a strong base for breeding in Quebec. 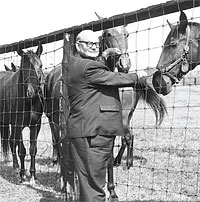