J. Samuel Perlman probably did more to improve the public image of horse racing than any other individual, be he Canadian or not. Born in Winnipeg, Man., at the turn of the century, Perlman began his career as a young reporter in the sports department of the Winnipeg Free Press and went on to become editor and publisher of the two largest racing papers in the world, the Morning Telegraph and the Daily Racing Form. In that job, he found himself in a position to mold public opinion on the sport he obviously loved and he made the most of the opportunity. Emphasizing the great sporting traditions of racing, the Morning Telegraph and Daily Racing Form became highly respected papers under Perlman’s guidance.

Perlman traveled extensively, promoting racing wherever he could. In his early years, he visited annually every track his papers covered. It was Perlman who originated the DRF’s annual poll to name the Horse of the Year. During his 16-year tenure as publisher, Perlman put the full support of his papers behind the formation of the Thoroughbred Racing Associations and the National Association of State Racing Commissioners.

The appreciation of the racing fraternity was revealed in the many honors and awards that were bestowed on Perlman. In 1950 he was honored by the NASRC for doing “an outstanding job for racing.” The following year the Jockeys’ Guild named him Man of the Year for “his thorough understanding of thoroughbred racing’s problems and his unceasing efforts to solve them fairly and constructively.” The HBPA honored him for “his many contributions and long service to racing” and the TRA for “his overall efforts on behalf of all phases of racing.” In 1959 every racing organization in Canada joined in an unprecedented joint award for his contributions to racing in this country.

In 1943 he left Canada and went to New York as assistant general manager, becoming general manager of the Daily Racing Form and Morning Telegraph a year later. In 1949 he was named publisher and in 1954 assumed the title of editor as well. In the early 1970s Perlman worked as a steward at Assiniboia Downs in his native Winnipeg and was responsible for the formation of the Manitoba Thoroughbred Breeders’ Association. 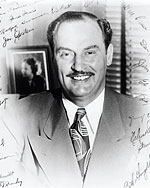